Kutaisi is getting more and more popular destinantion among travelers and backpackers, due to cheap flight connections and relatively low prices. Kutaisi is the second largest city in Georgia and in my opinion, like whole this country is full of contradictions. Special attention deserves Gerogian architecture. I won’t hide that I’m as green as grass in this topic, but I have to admit that Georgian fantasy in this subject was a great surprise to me. 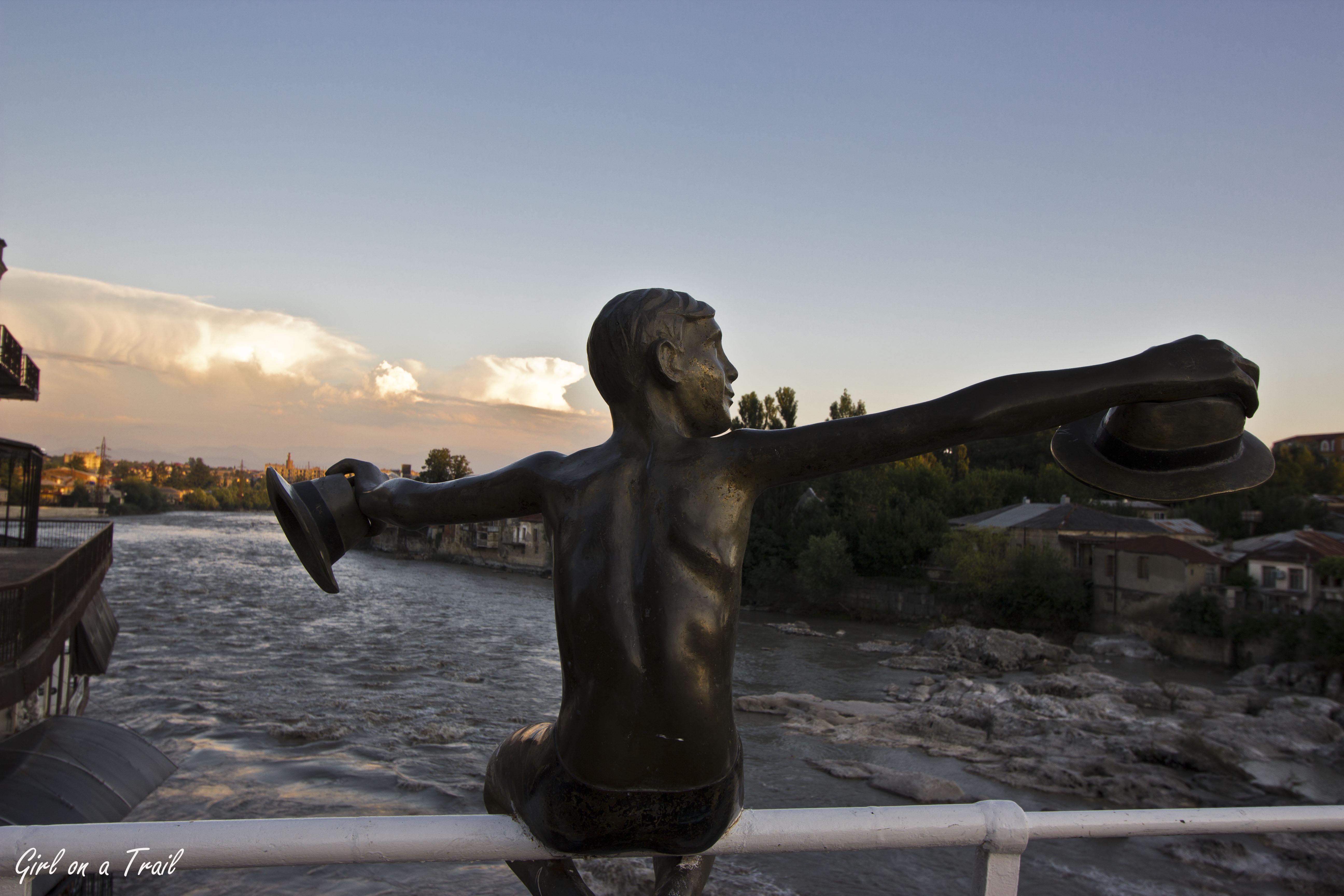 In 2012 President Saakashvili decided to transferred here the Georgian Parliament, which previously had been located in Tbilisi. It wouldn’t be surprising but for the fact that Parliament’s building is located on the outskirts of the city, in the middle of the field and to top it all off its architecture resembles a spaceship 😉

The second building which sparks controversy among many Georgians is Bagrata Cathedral. The ruins of the former cathedral existed in Kutaisi from 17th century and were preceived as a national symbol. Despite numerous protests, president Saakashvili decided to rebuild it in a style, let’s say, rather modern. 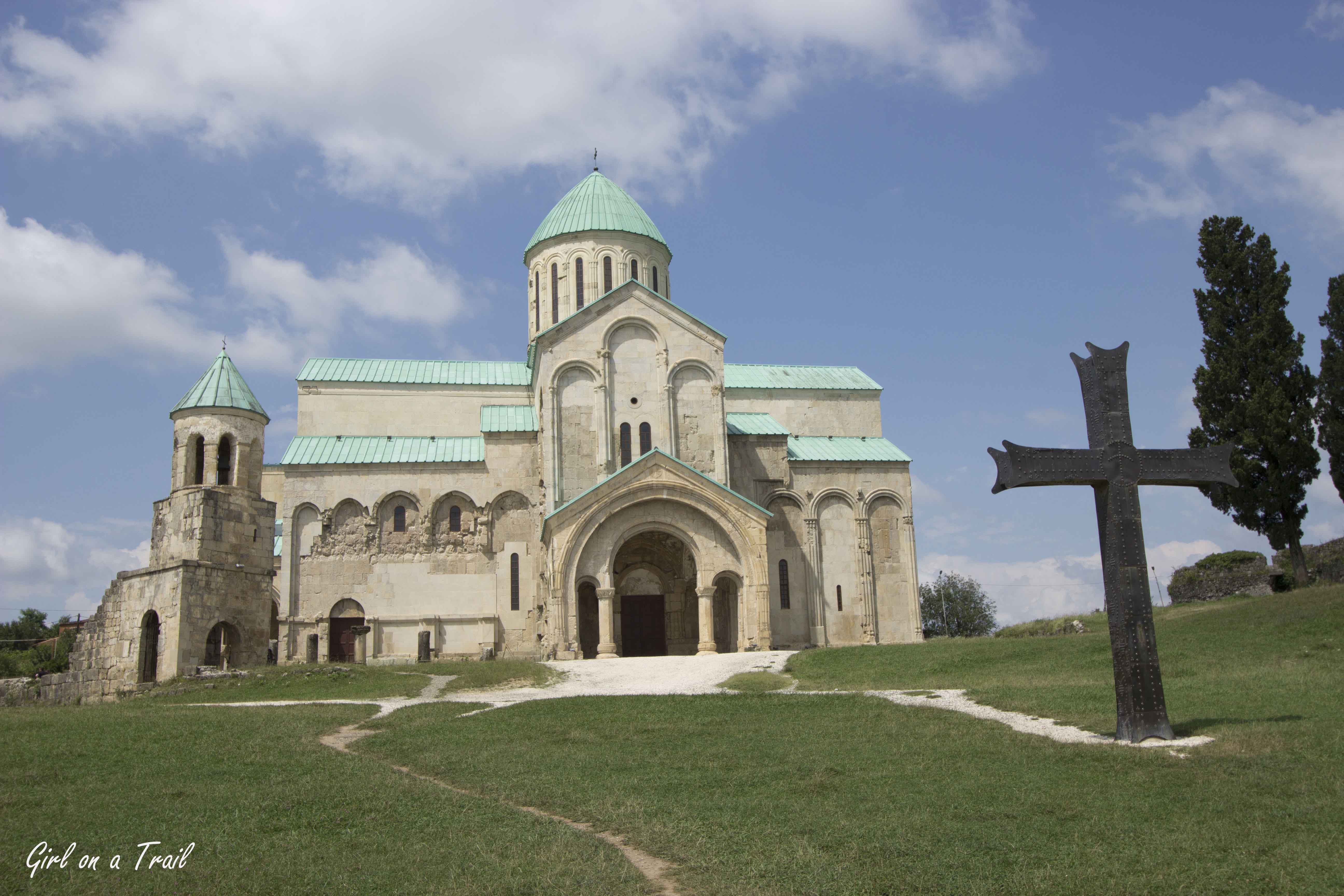 Kutaisi is surrounded by hills with an interesting view of the city and the river Rioni. The River Bridge is the main gathering point for locals and a mandatory point of every tour.

Right next to it, there’s a cablecar leading to the Besik Gabashvili Park, located on one of the Kutaisi hills. On the top you can enjoy your time at a funfair that looks like straight from the previous era.

The mandatory point on the Kutaisi map is the bazaar located between Paliashvilli and Lermontov streets. It is said to be one of the most interesting and colorful markets in whole Georgia. After visiting this place, I can believe it. 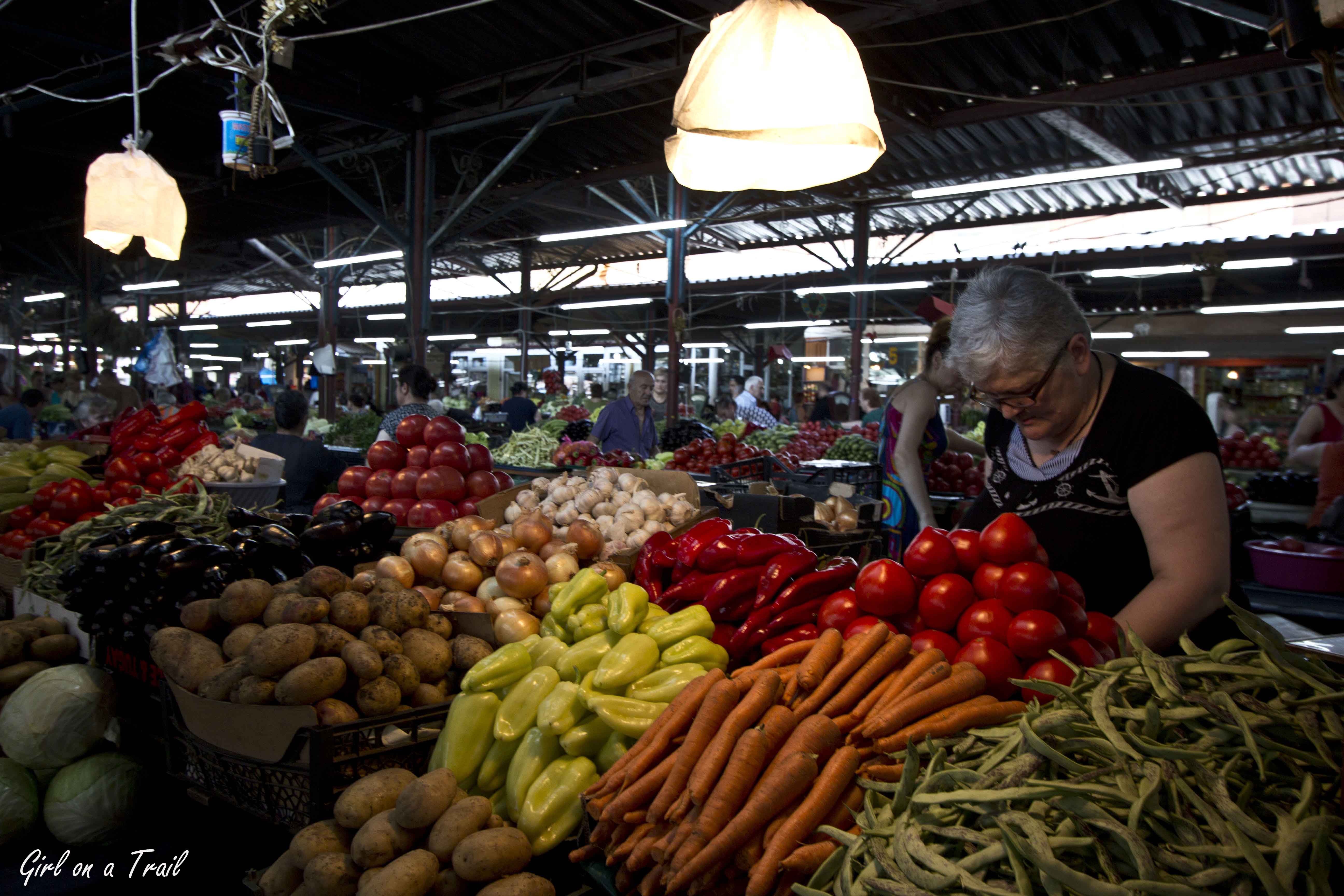 You can taste here a lot of  kinds of fruit, vegetables, spices and nuts. A trip to this place is also an interesting cultural experience. You can see everyday life in Kutaisi. 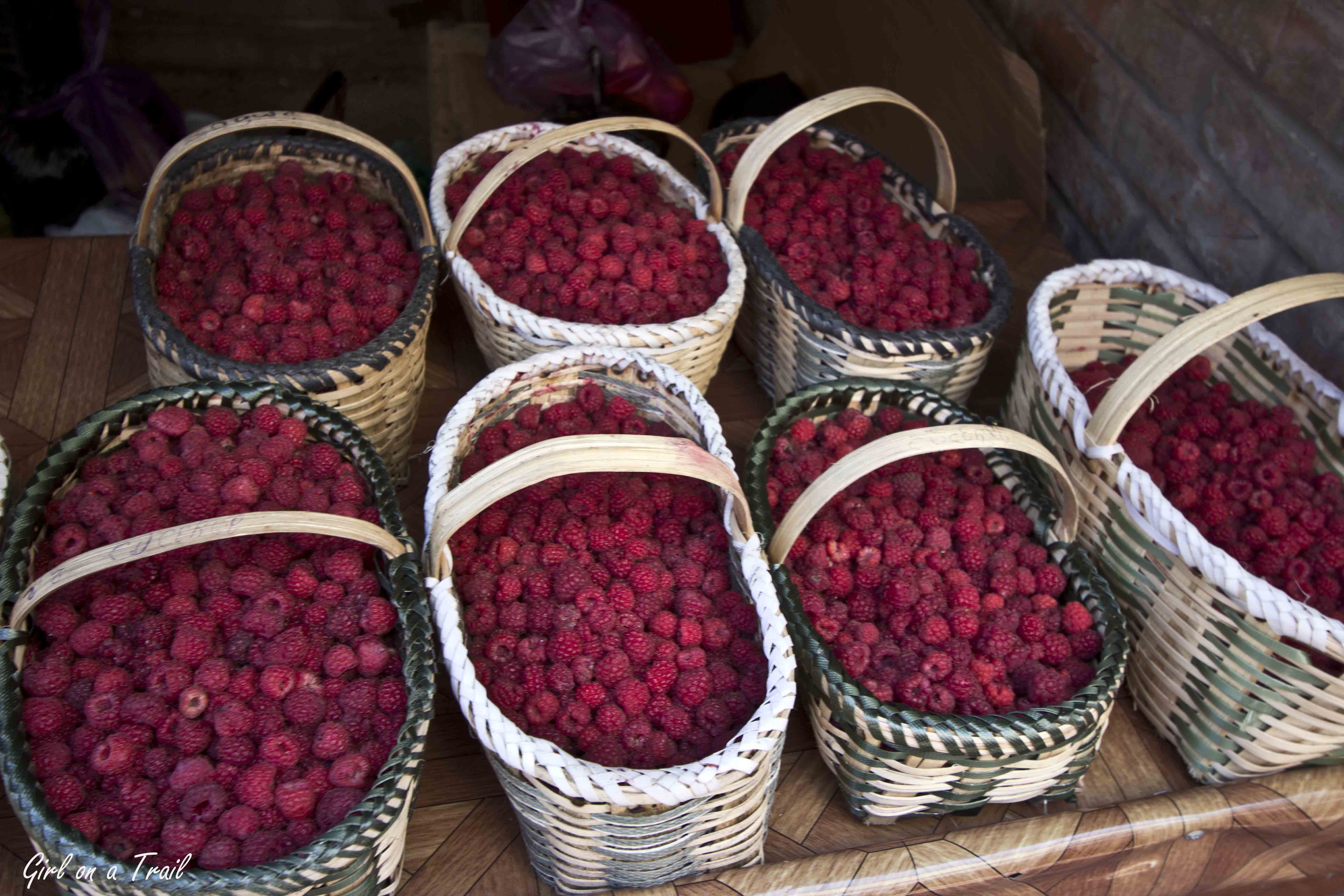 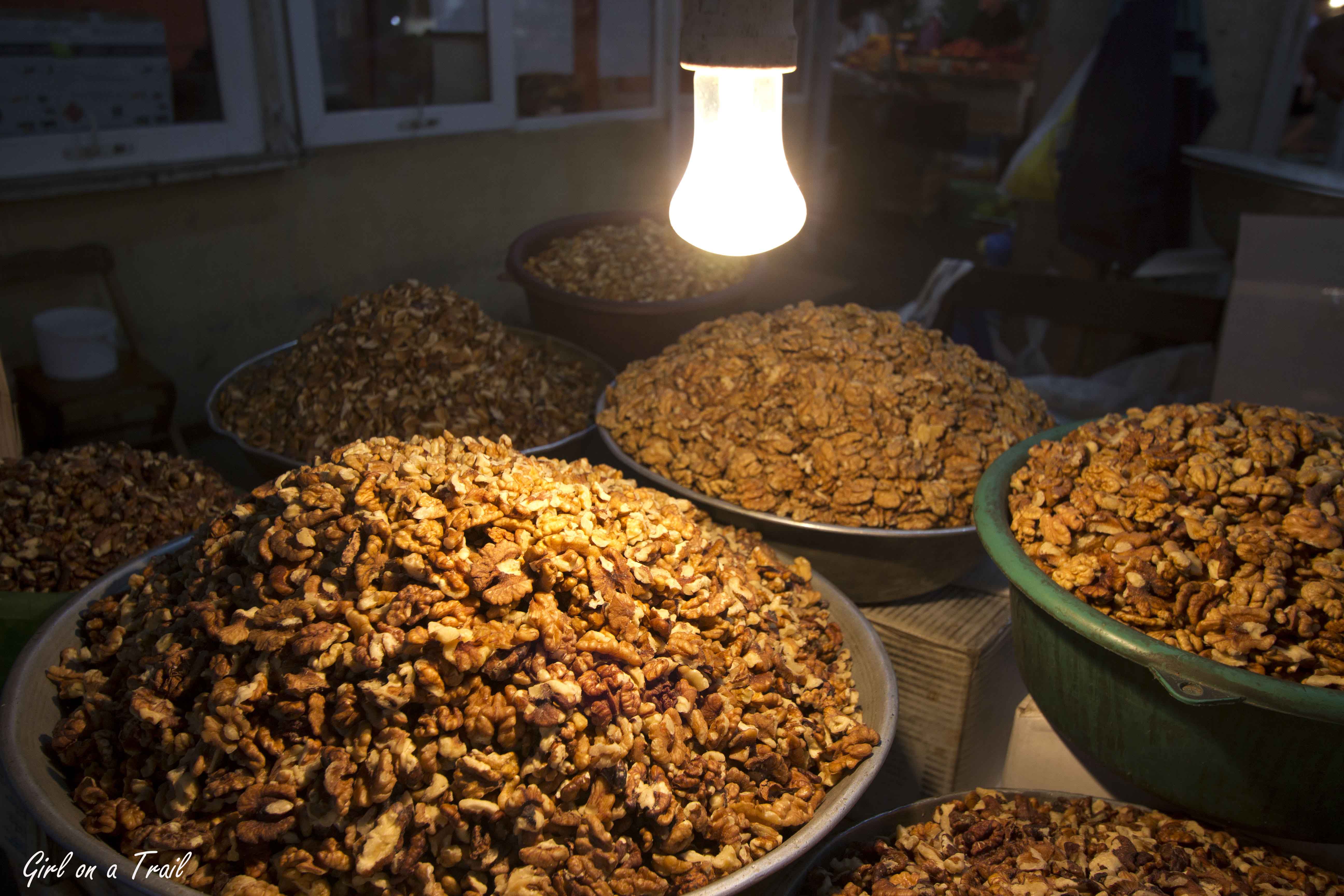 In my opinion, it’s well worth going to the part with dairy products, where you can see old sellers advertising homemade cheese and even try it.

However, the part with meat is also specific, to my surprise most vendors were really drowsy there 😉 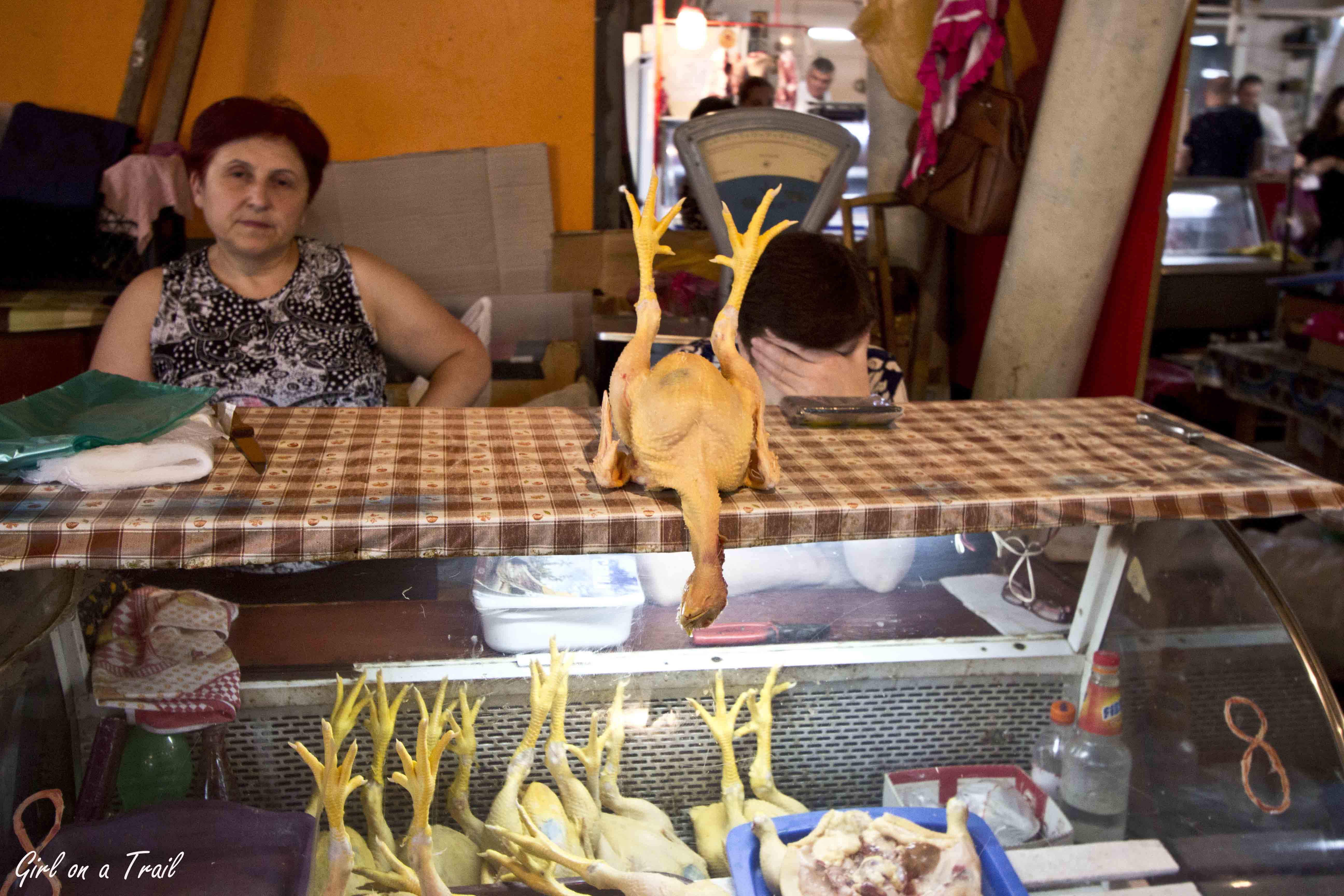 In the market, you can try the famous churchkhela, also known as Georgian Snickers. These delicacies, which look like sausages consist of walnuts dipped in grape juice. 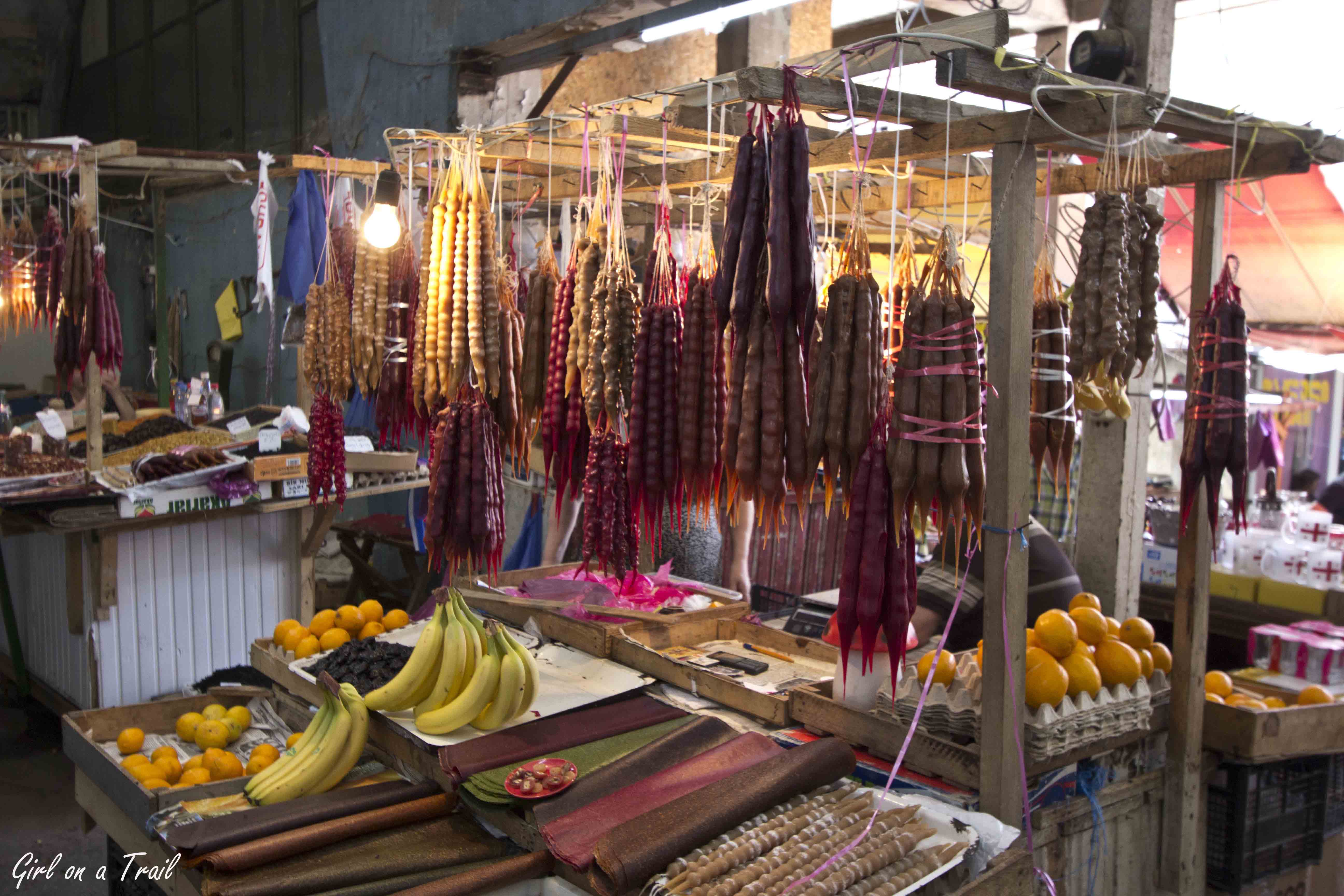 And for a drink I would recommend the famous, slightly forgotten, so called Kvass (bread acid), served straight from huge barrels.

Kutaisi is also a very good starting point to visit nearby tourist attractions. Everyone knows the myth about Prometheus who stole the fire from the gods to give it to people. He was punished for it and chained to Khvamli mountain that you can see from the Prometheus Cave, located near Kutaisi. But this story is not the only reason to visit this place. The cave surprises by its size, colours and numerous stalactites and stalagmites.

A mile-and-a-half walk through the cave  can be completed with a boat cruise. To the cave you can get by using marshrutka number 30 going from the west end of Tsiteli Khidi (Red Bridge) to the city of Tskaltubo (normal ticket – 1 Gel, trip takes 30 minutes) and from there get on marshrutka no. 42 to Prometheus Cave (normal ticket – 1,5 GEL, trip takes 20 minutes) Admission to  Prometheus Cave costs 7 GEL and you need to pay additional 7 GEL if you want to go by boat.

Next to Kutaisi is another cave – Sataplia. Its interior is not as colourful and  large as the Prometheus Cave, but there are dinosaurs’ footprints. In the park next to the cave, there’s an excellent terrace with a beautiful panorama of Kutaisi. You can get there by minibus N45 that leaves Kutaisi Central Agricultural Market (behind the Kutaisi Lado State Academic Theatre). It shuttles every day except Sunday. Normal ticket costs less than 1$ and the travel takes around 40 min. Entrance fee to the cave costs 3$.

Incredible views guarantees Okatse Canyon, where you can admire beautiful views from footbridge which runs over the trees. There is an amazing view of the Okatse river. Entrance fee costs 6 GEL. 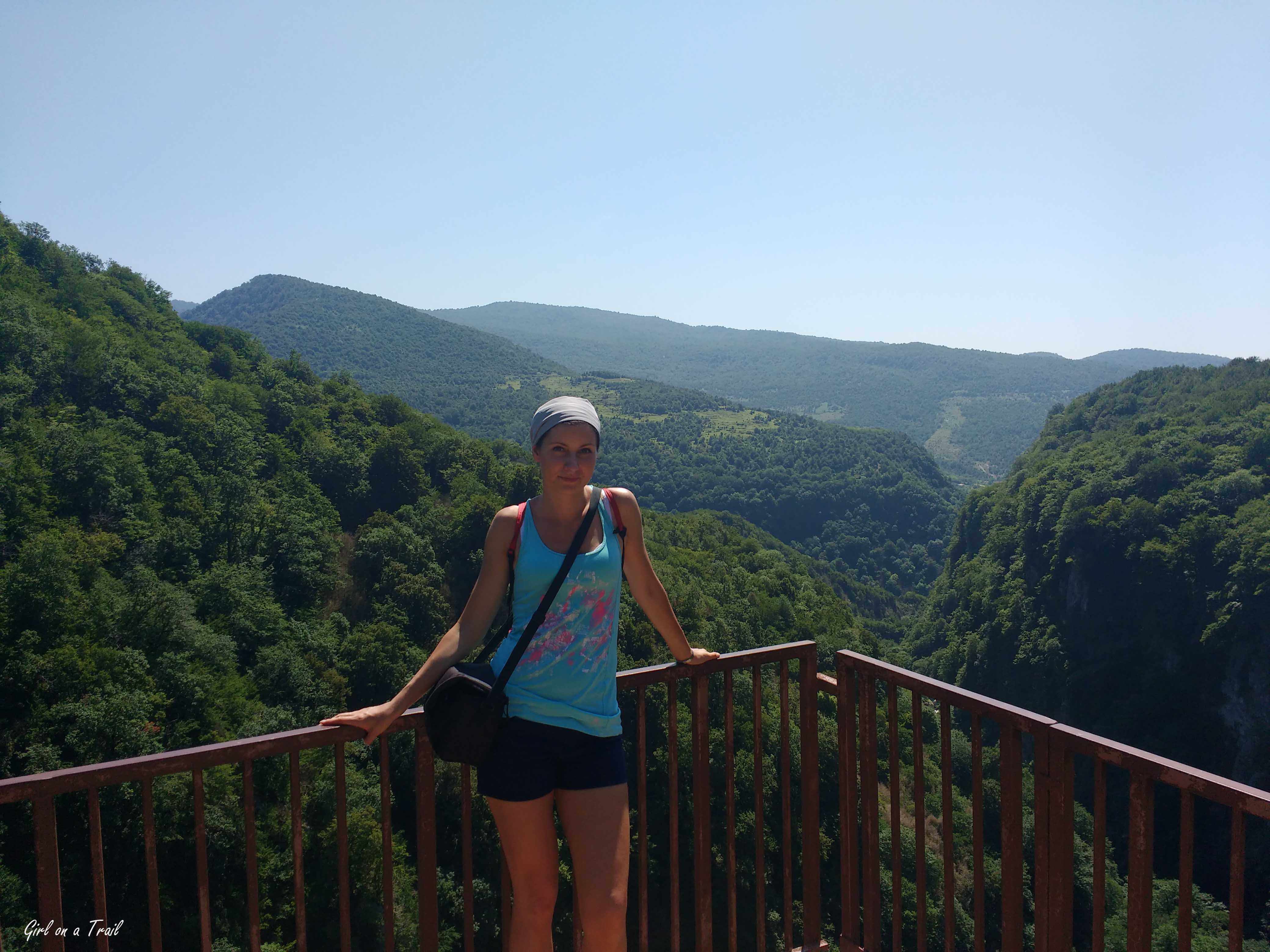 Another mandatory point is Gachedili Canyon, which is famous for lush vegetation and waterfalls.

The fastest way to visit all of these places is buying a tour with the local travel agency. I used Giga from Budget Georgia.

If you have more time, you can also take a day trip to famous Georgian resort – Batumi. Marshrutkas from the Bus Station in Kutaisi go to Batumi every half hour. The journey lasts two and a half hour and costs 10 GEL (data from 2017 ). 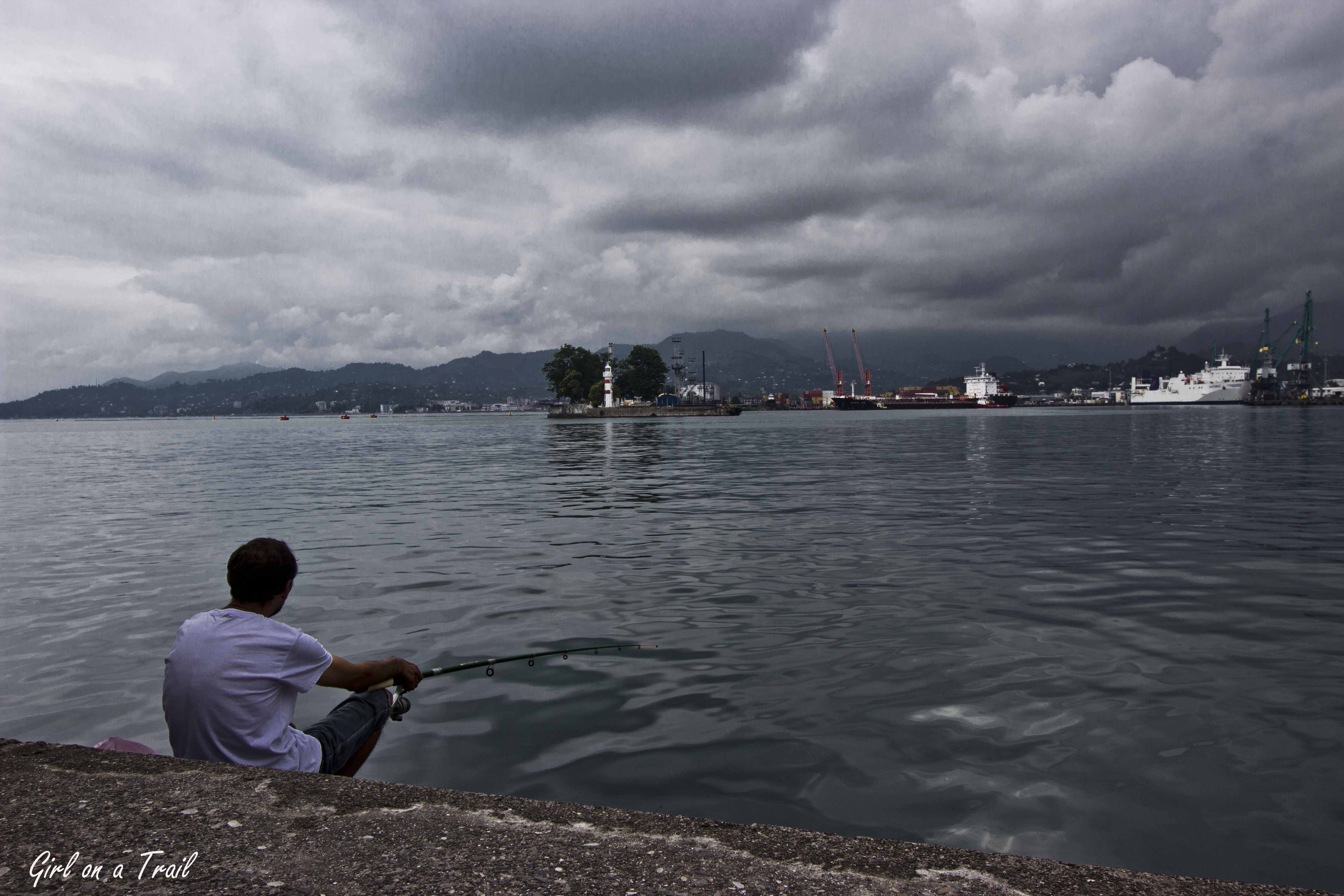 While architecture in Kutaisi surprises, the one in Batumi knocks out. In the centre of this resort, you can see both old communist blocks of flats, typical colonial architecture or palaces, and to top it all off modern skyscrapers. 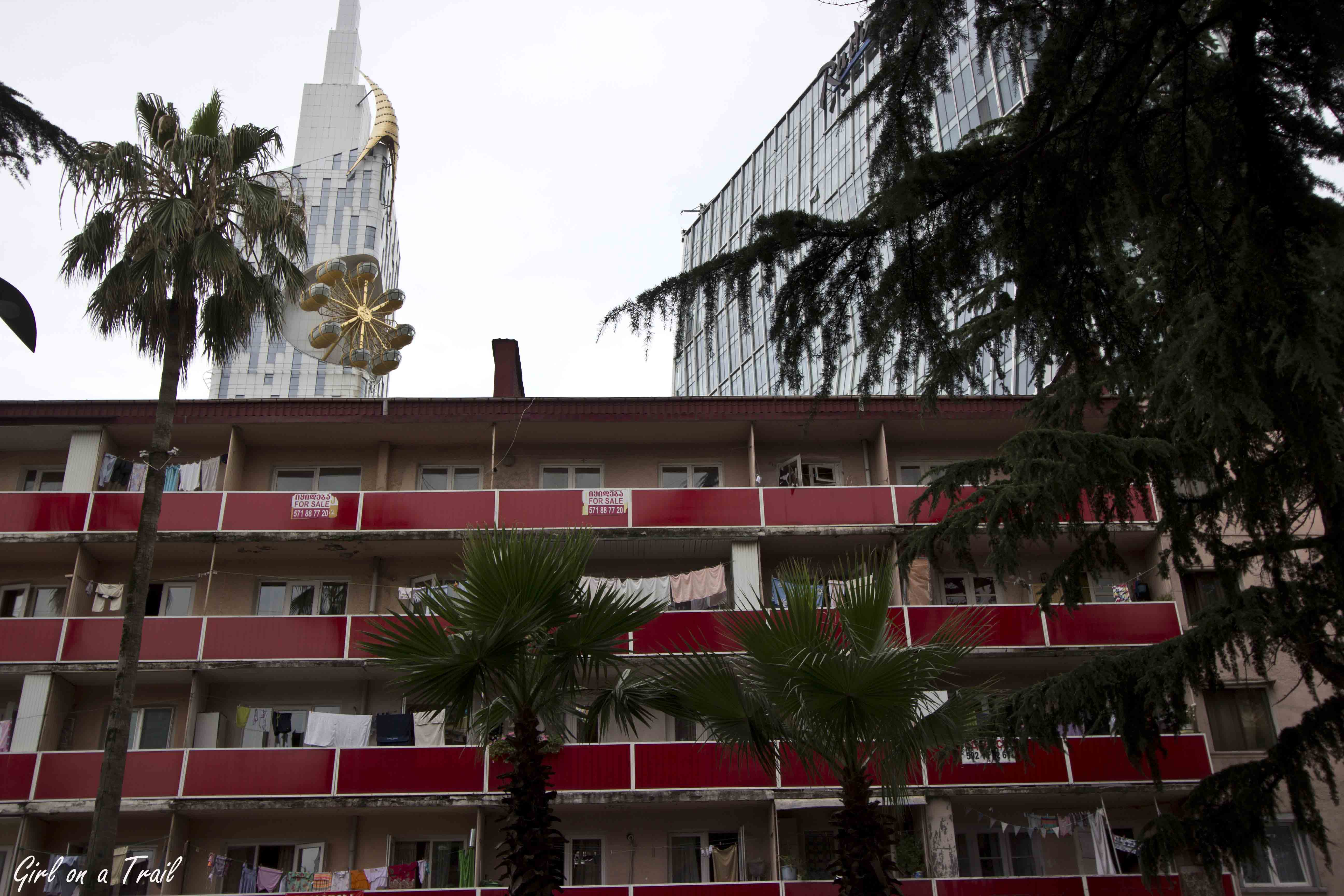 The main point of the city is the promenade which stretches along the rocky beach.

Here you can see a lot of “gems” of Georgian architecture. There’s a spiral tower with the letters of the Georgian alphabet and the statue of Ali and Nino, symbolising unfulfilled love of Azeri and the Georgian princess who were separated by the war. 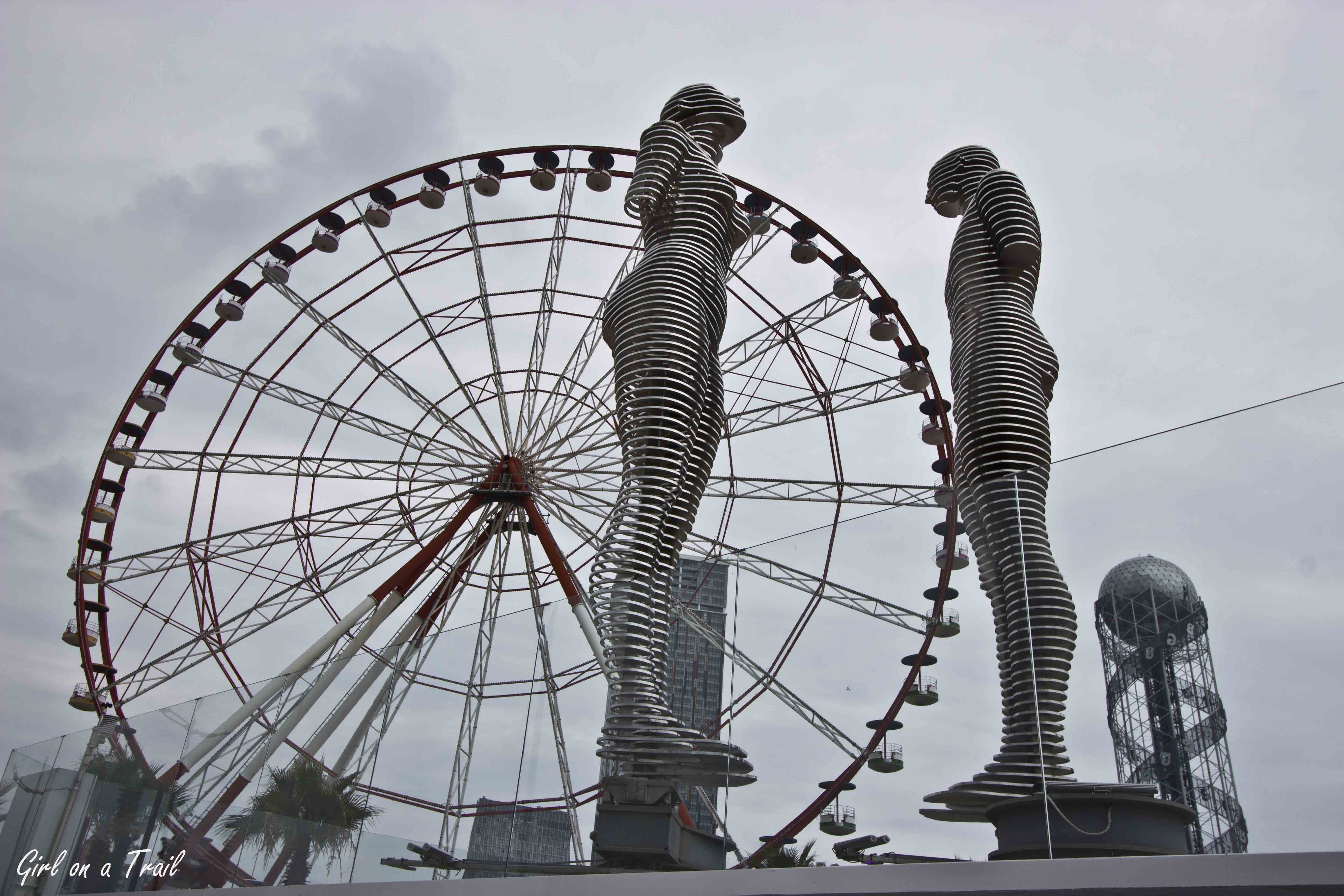 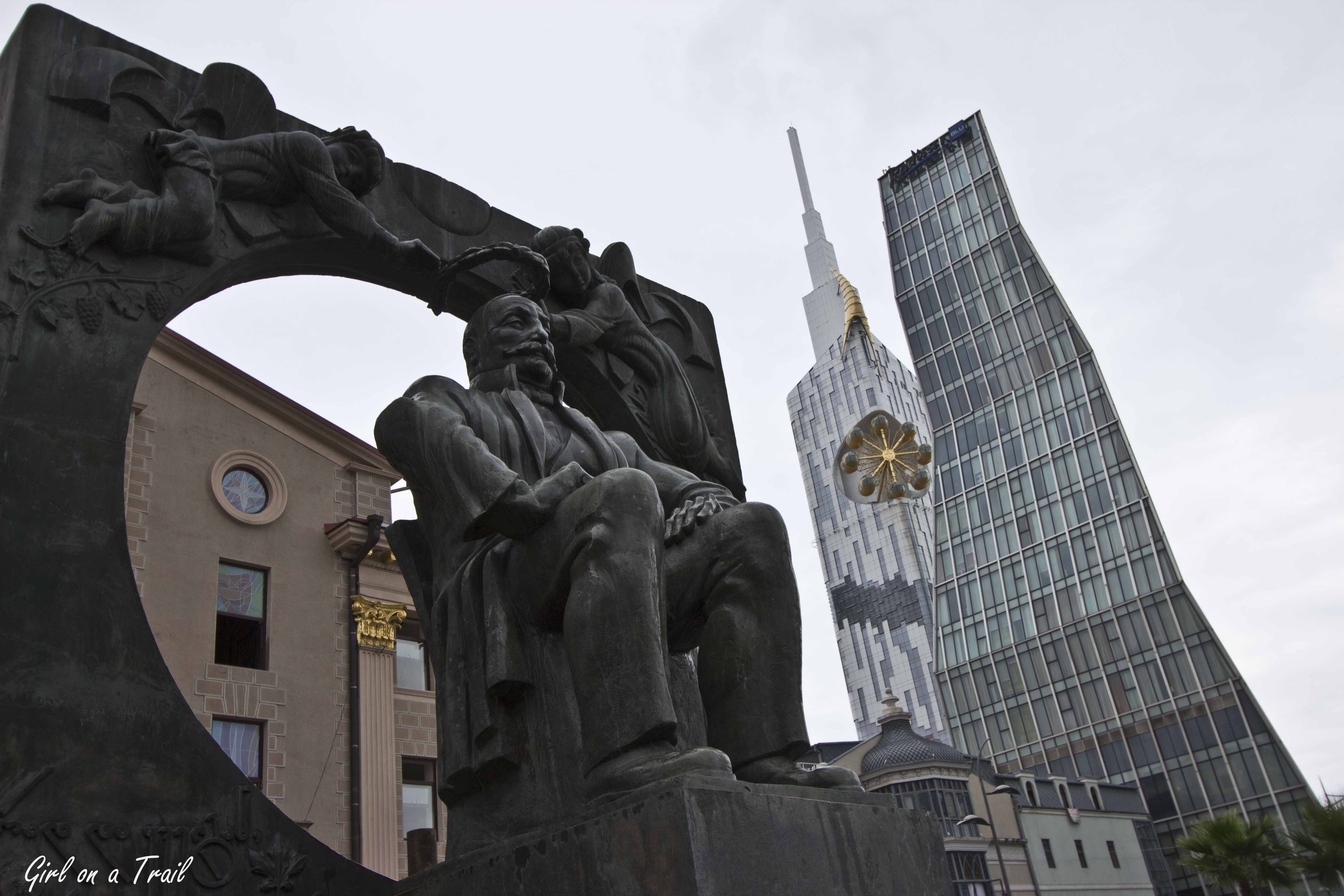 I didn’t fell in love with Batumi as a resort, and I must admit that one-day tour to this city was sufficient. The whole city seems to be under construction and I’m afraid how it’ll look like in several years’ time. Nevertheless, this architectural chaos is charming  and curious, in a certain way 😉 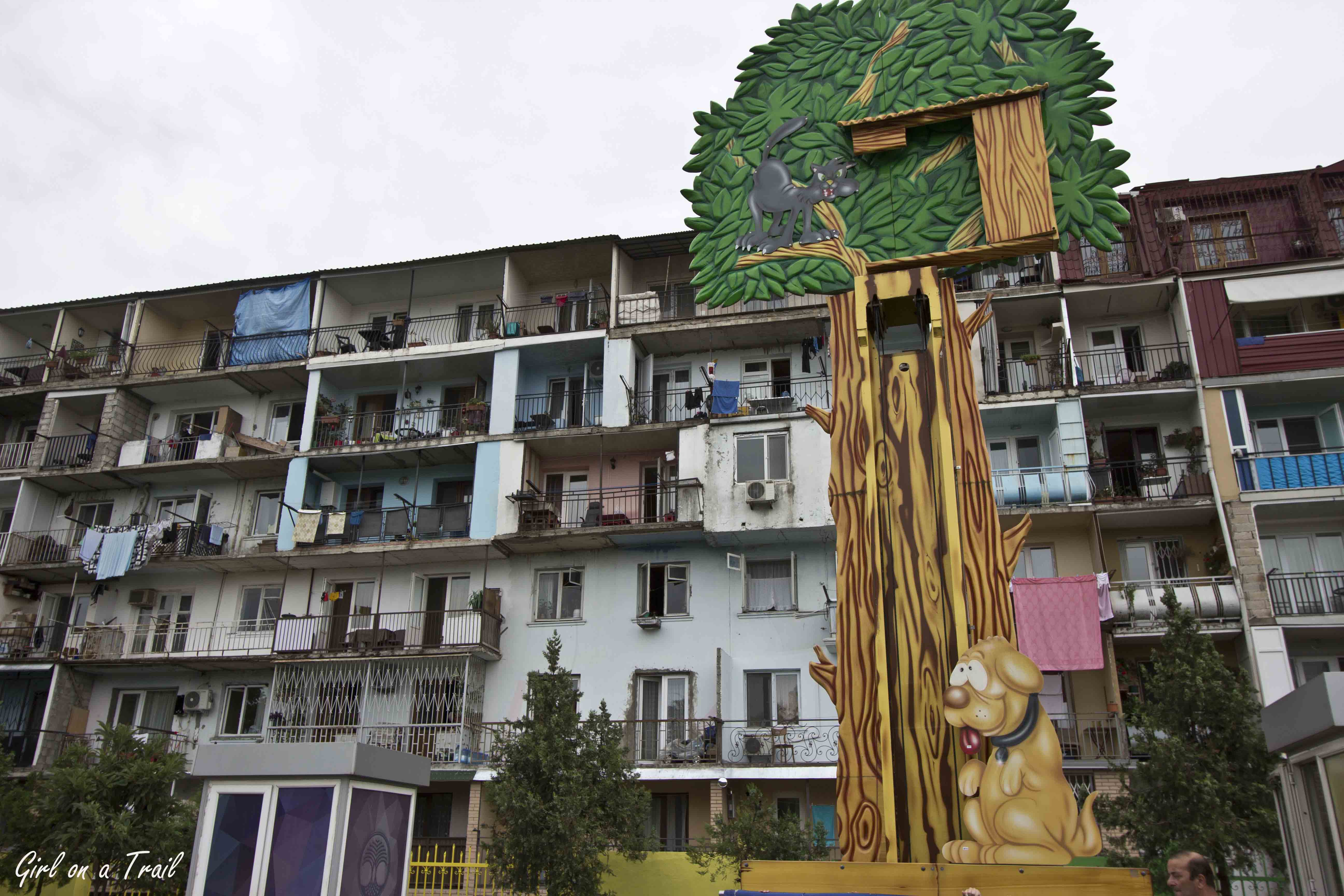 David Gareja – the story of a certain
prev next