Famous Sankt Petersburg is an exceptional city. It’s a mix of everything what’s the most beautiful in Russian and European architecture. This city was tsar Peter’s the Great dreams. During his voyages through Europe he wanted to build from scratch a city – the symbol of modern Russian empire.

One thing we’ve to hand to Peter, he did quite a good job! 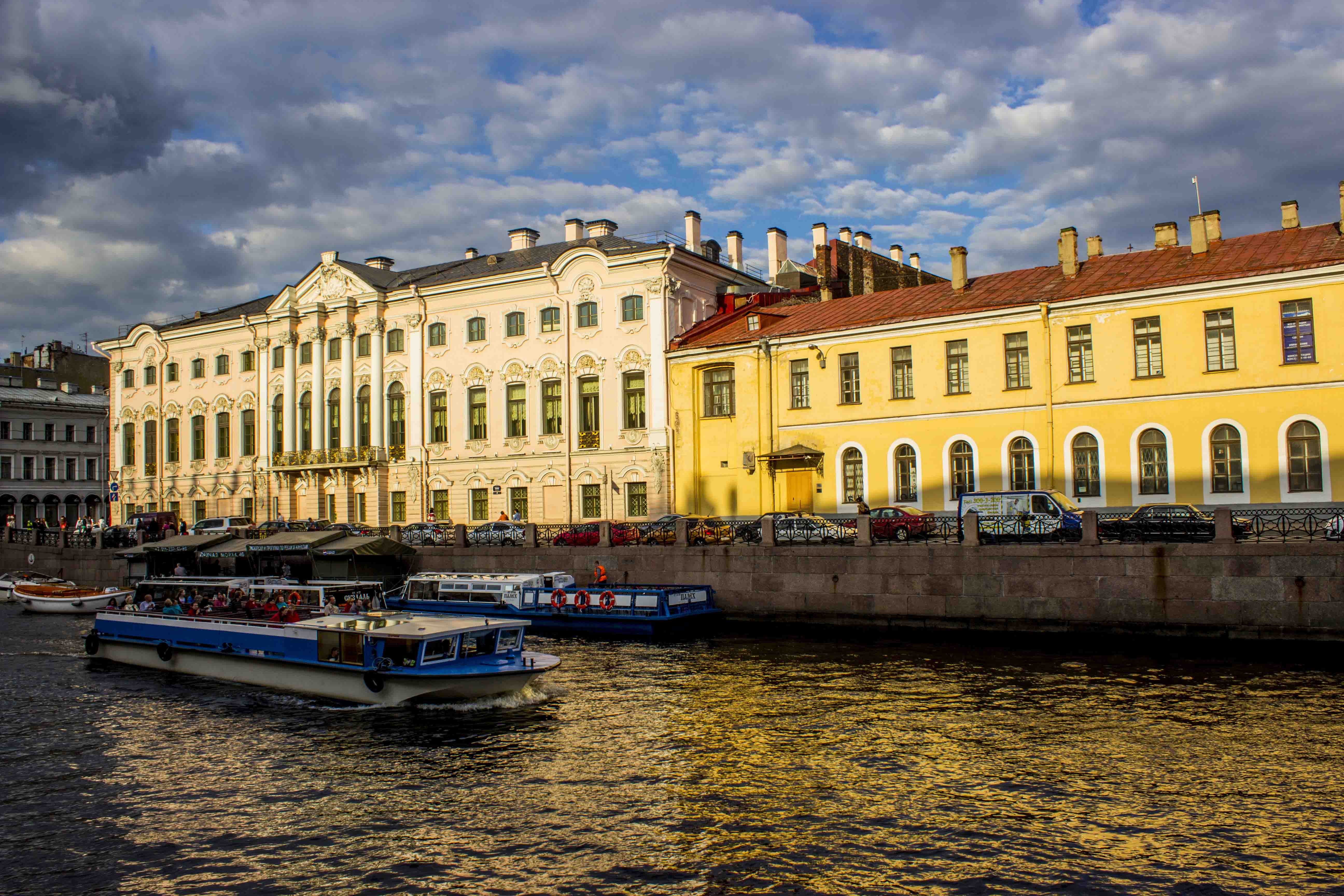 The most important historic events for the Russian empire took place in Sankt Petersburg: Bloody Sunday, the Russian Revolution or 900-day siege during WWII, when almost 640 thou. people died of starvation 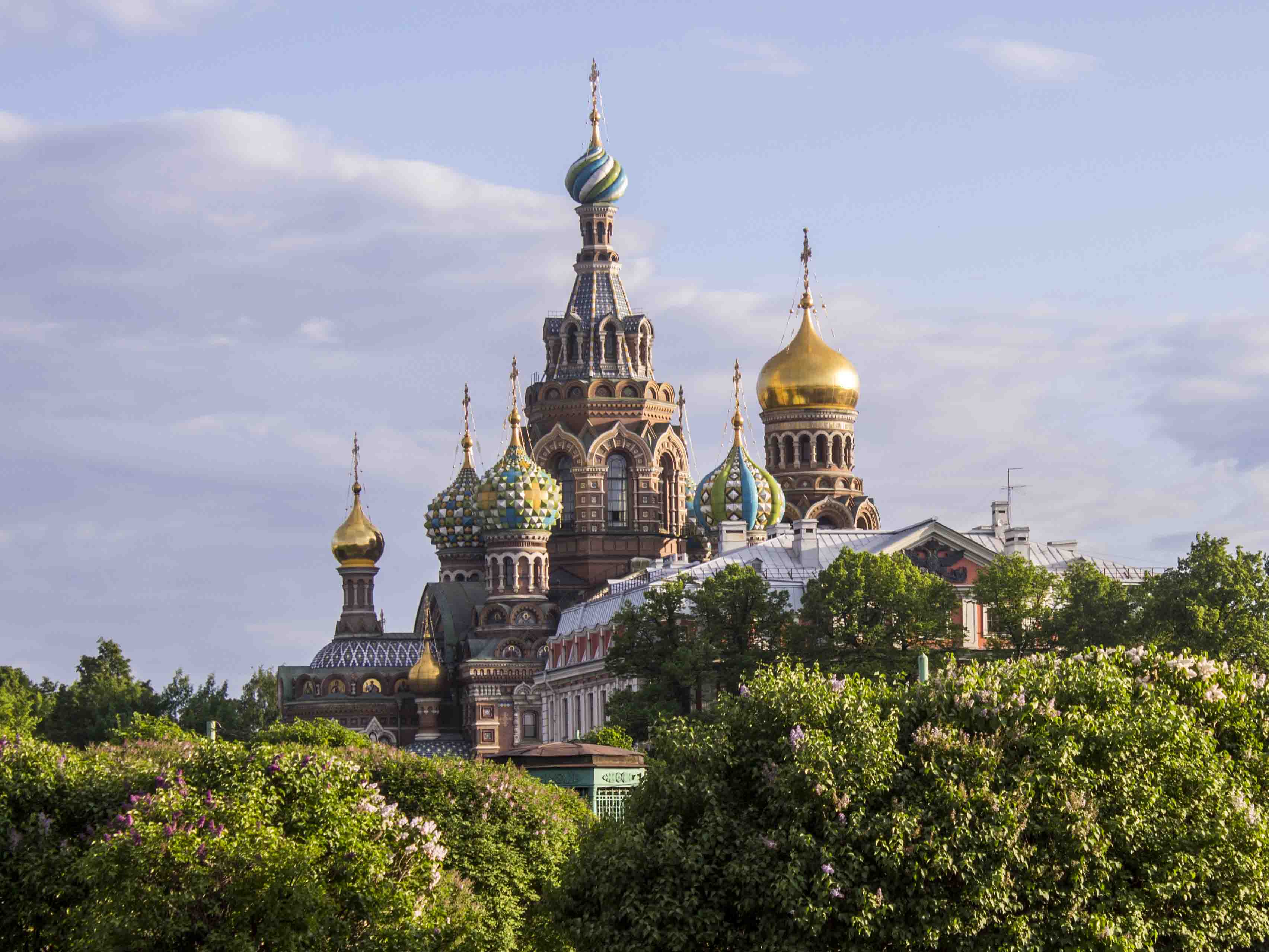 Sankt Petersburg is a city located on the area of at least 40 islets connected by 300 bridges and innumerous amount of canals. For this reason, it’s also called “the Venice of the North”. 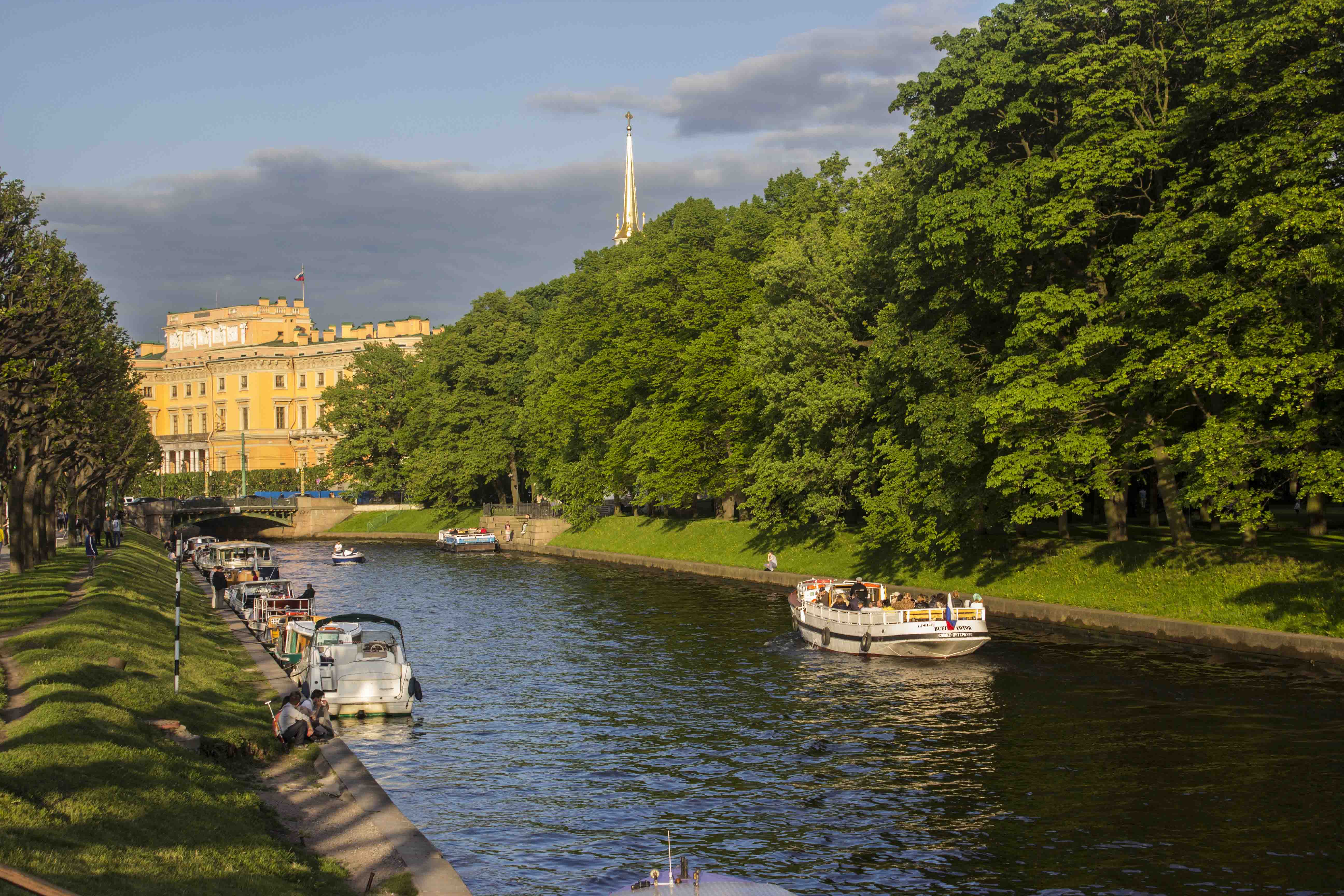 But in our opinion it’s very hard to find similarities between these two cities, starting with architecture and ending with totally different culture. Venice is Venice and Petersburg is Petersburg. 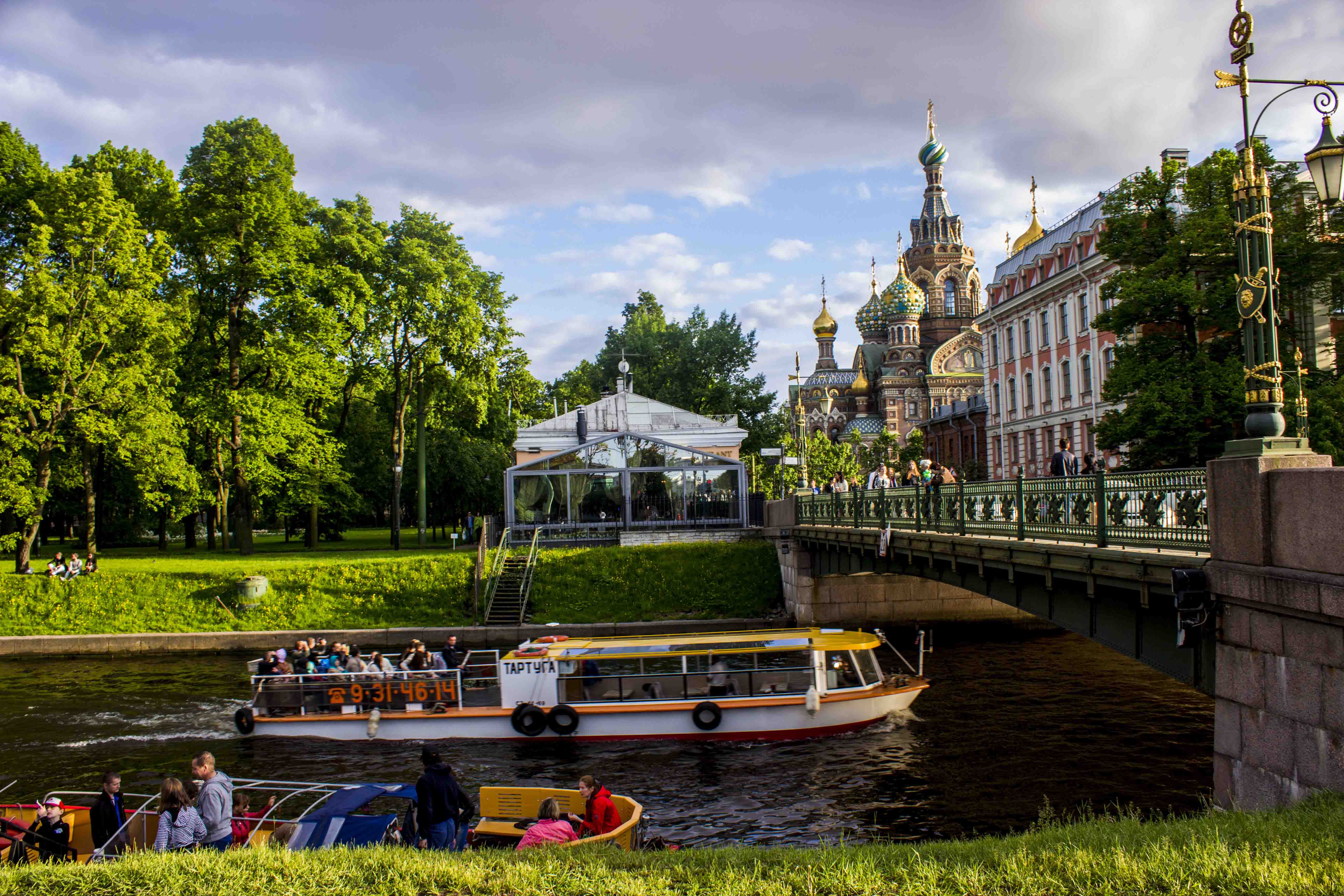 Here you can see more than 20 drawbridges, which are lifted up in the middle of the night. This procedure is an additional tourist attraction and poses a really big problem for those who want go back home after a party. Unfortunately we didn’t see this spectacle as we were totally exhausted. 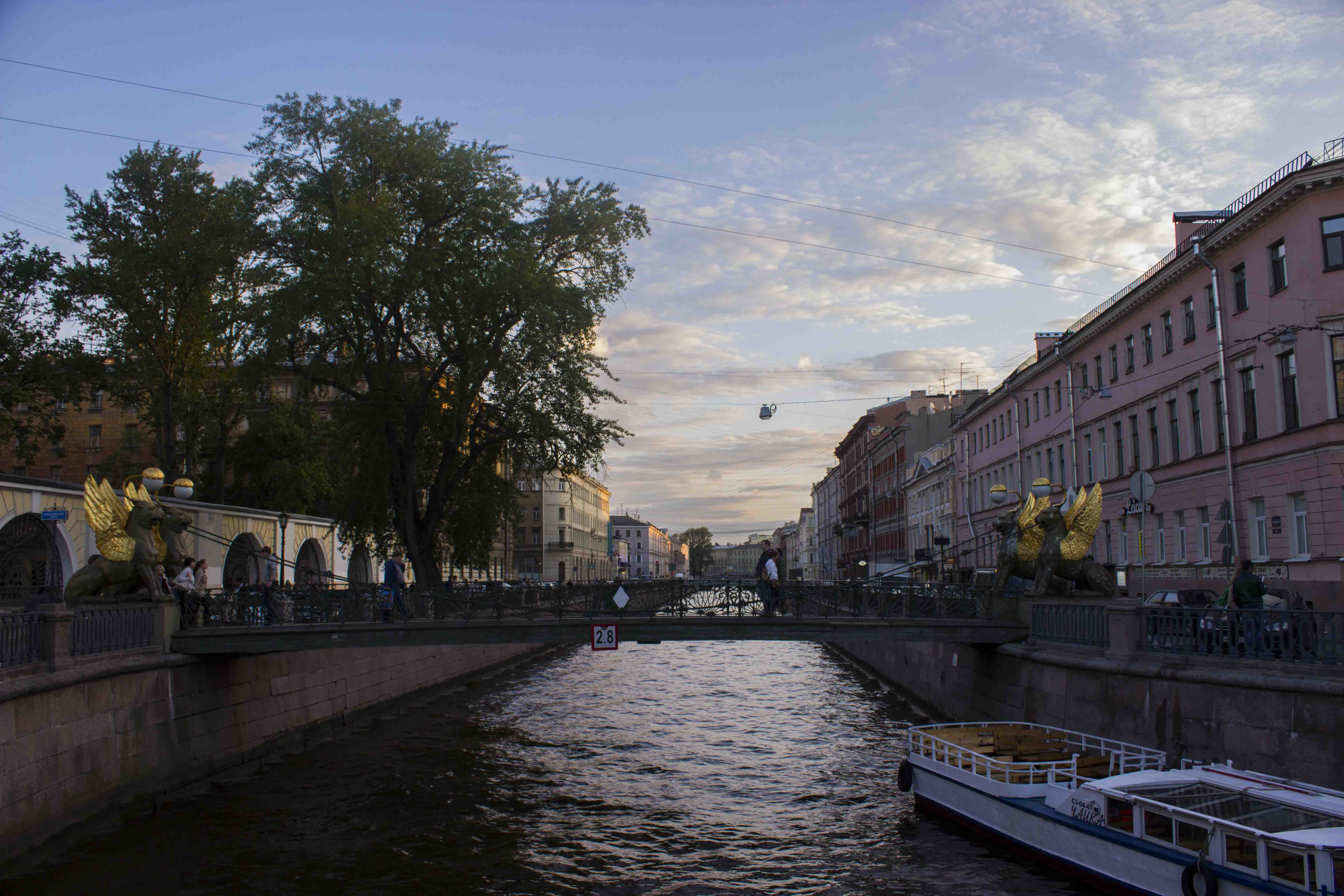 Intensive 72-hour itinerary and white nights worn us out. Before our trip, we’re wondering how Petersburg residents deal with the lack of nights and days which last even 19 hours. It seems that they apparently don’t need to sleep! 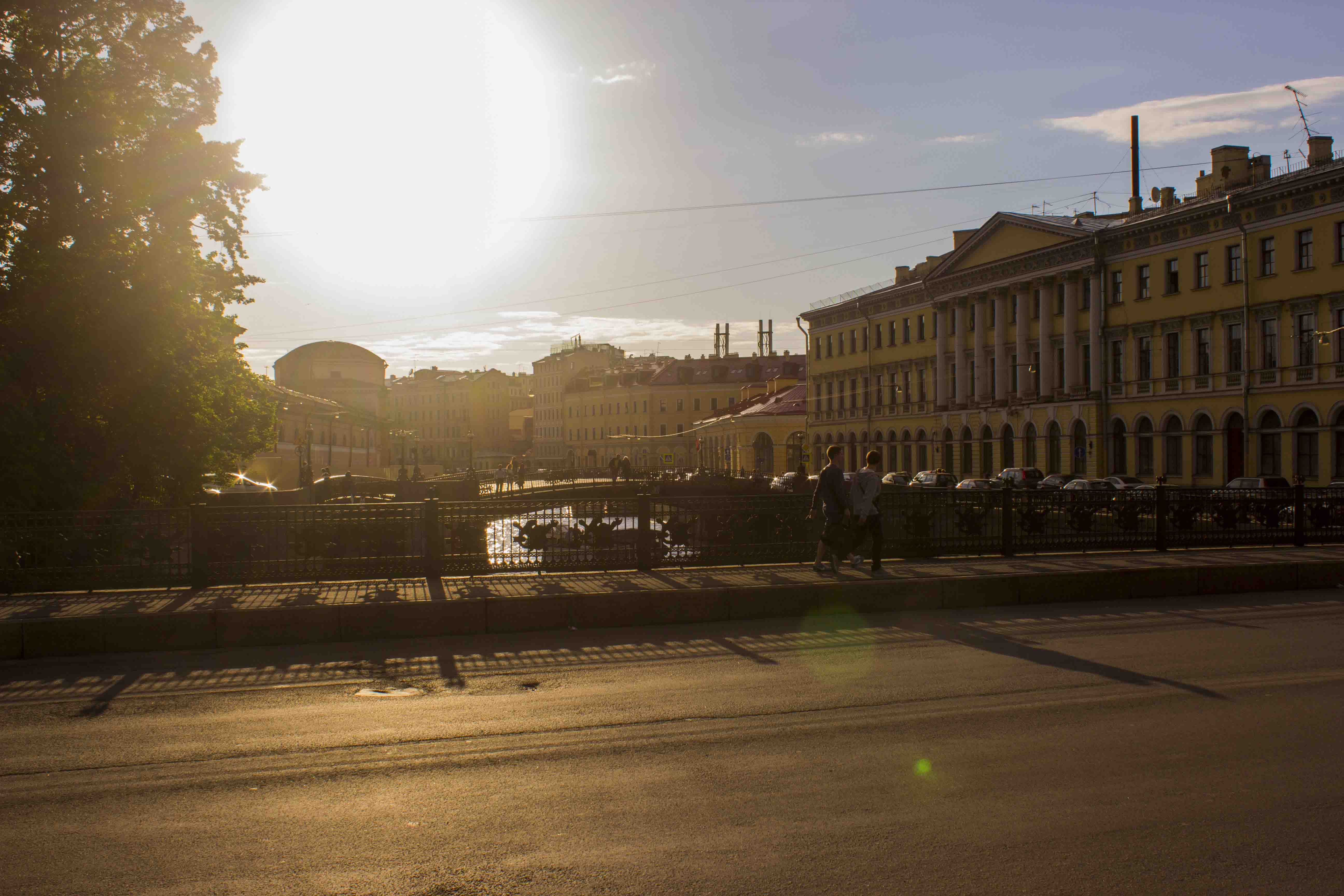 During sightseeing, the time seemed to stop and the day dragged mercilessly. Since all the time was brightly, we could see a LOT. 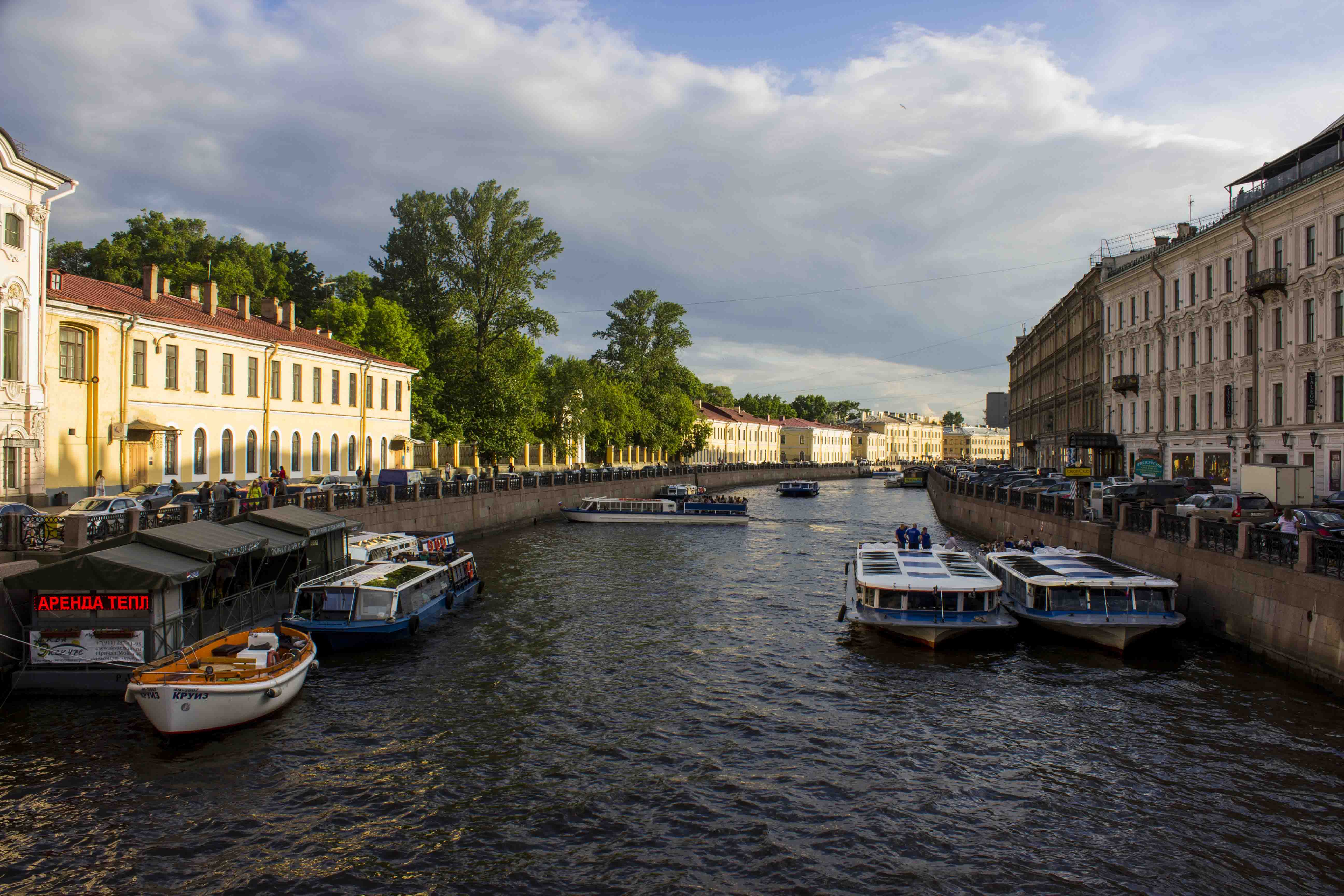 We decided to finish our sightseeing with the rest on the Field of Mars. It was used for a lot of purposes. There were organized parades or even it was used as a farmland during the siege of Leningrad. In the center you can see the Monument of the Fighters of the February Revolution who were buried there. 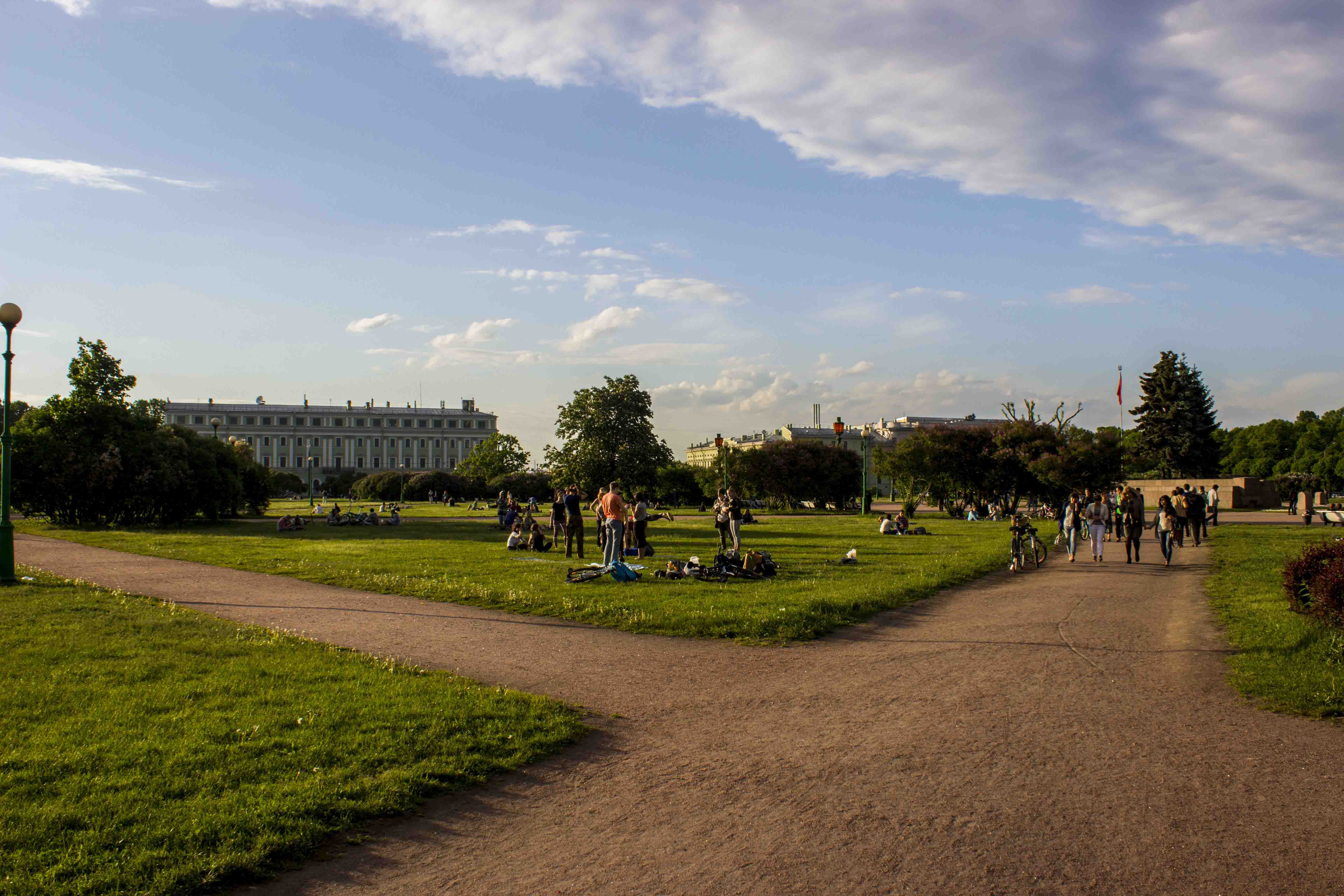 Across the canal is Saint Michael’s Castle which resembles more a fortress rather than the tsar’s palace. By the way, it was the idea of the originator of this building – Tsar Paul I. Unfortunately solid walls, underground tunnels or secret passages didn’t save this emperor from death. After 2 months after moving to this new residence, Tsar Paul I was murdered. 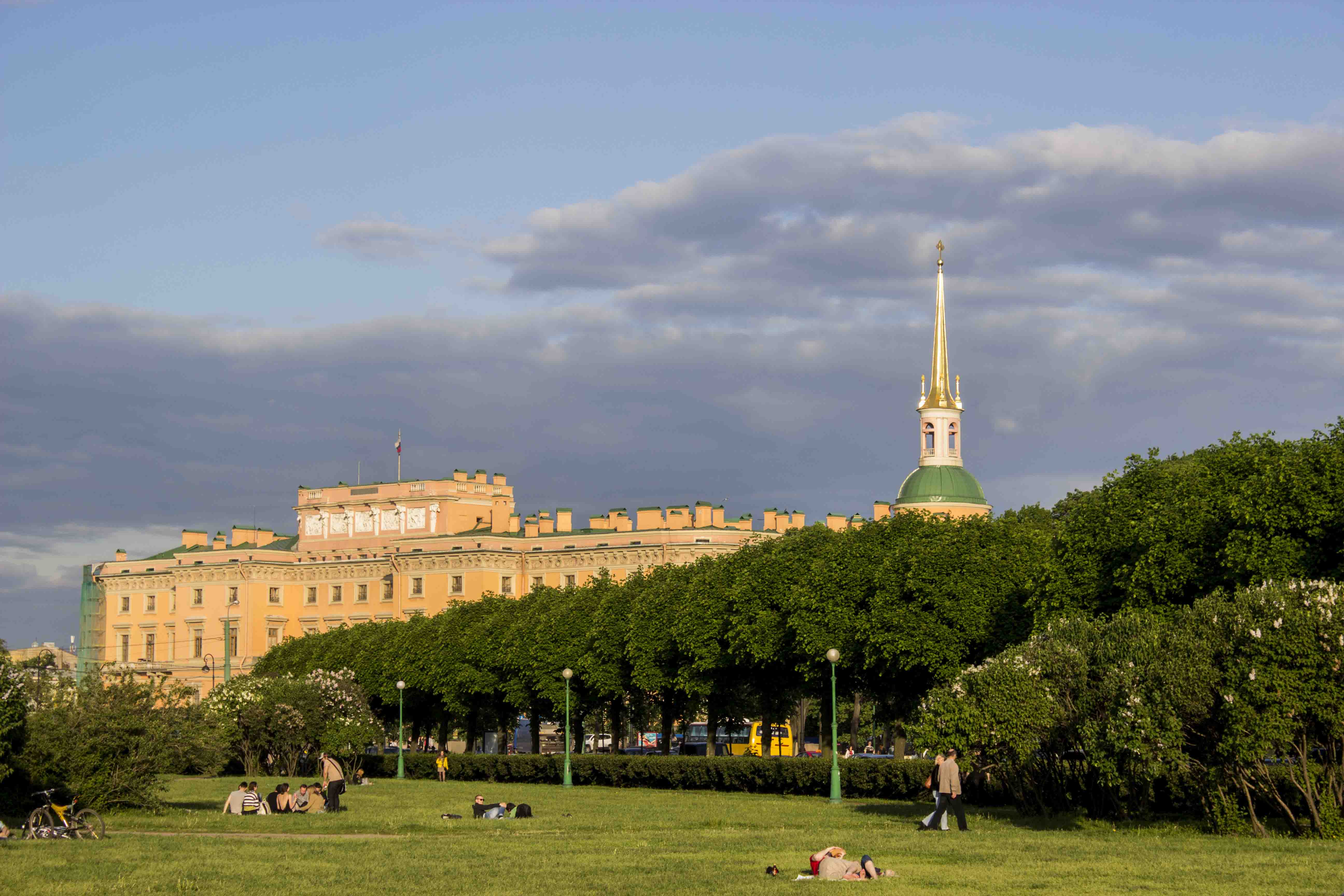 Nowadays the Field of Mars is a popular place to spend free time. The square was really crowded. 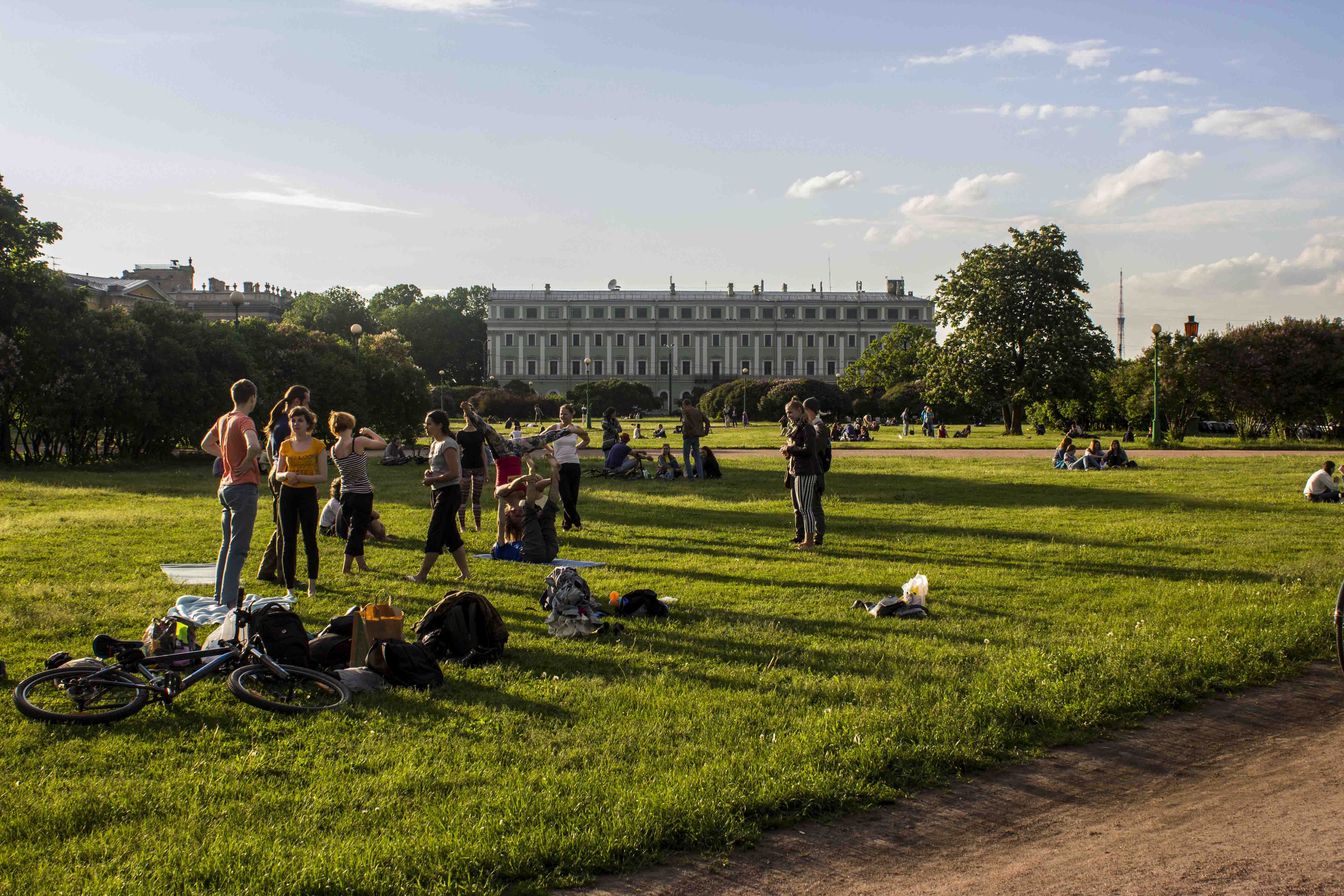 Some people were lying on the blankets, some were playing guitars or riding a bike and mothers with children were strolling.  Day as usual, nothing special… apart from the one detail – it was 1.30 am! It’s better not to check the time because you can feel really faintly, especially when you have a prospect of a long sightseeing plan for the next day (but actually the same day). 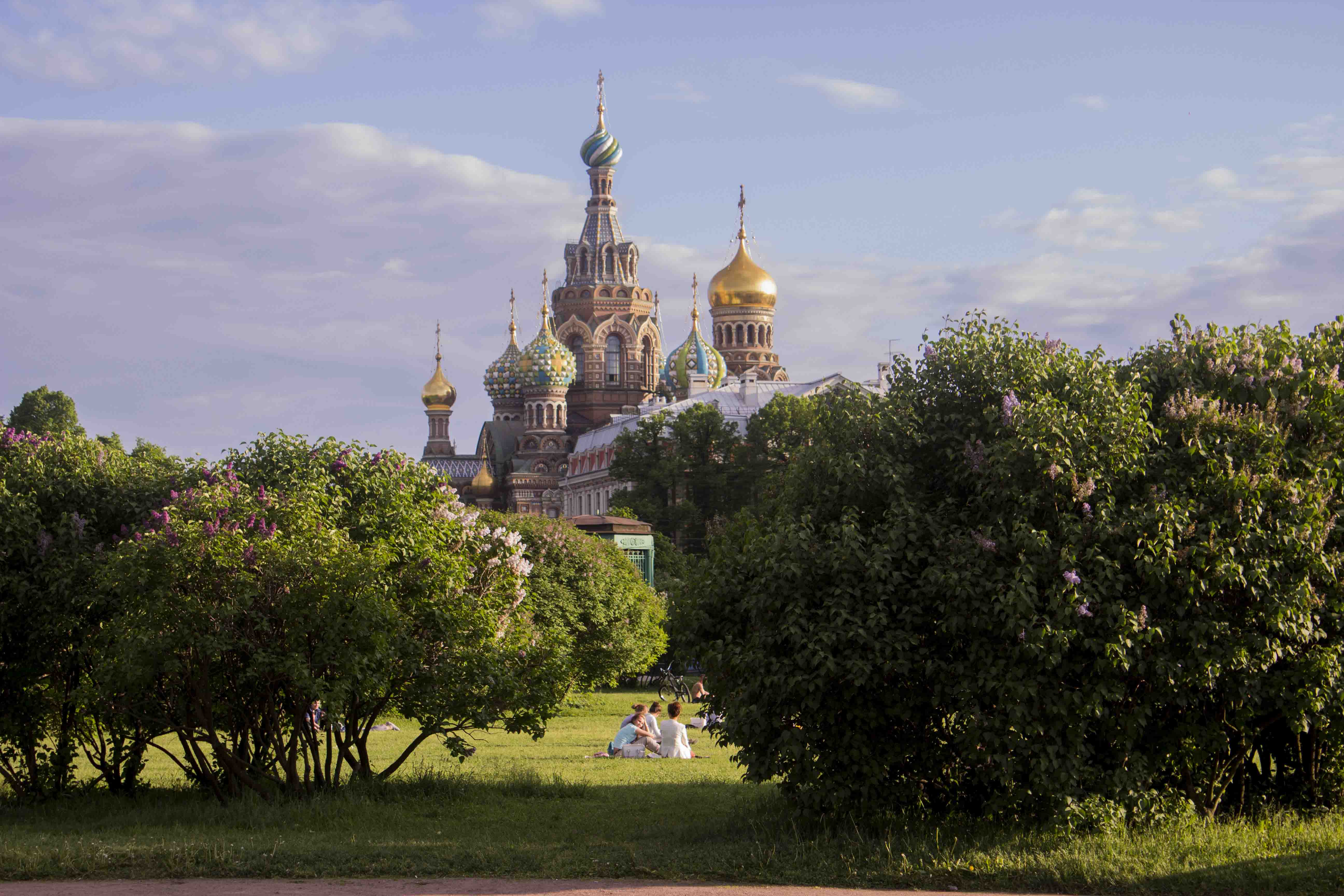 So what else one can visit in Petersburg in only 72 hours?

Of course, Winter Palace with the famous Hermitage is a must. 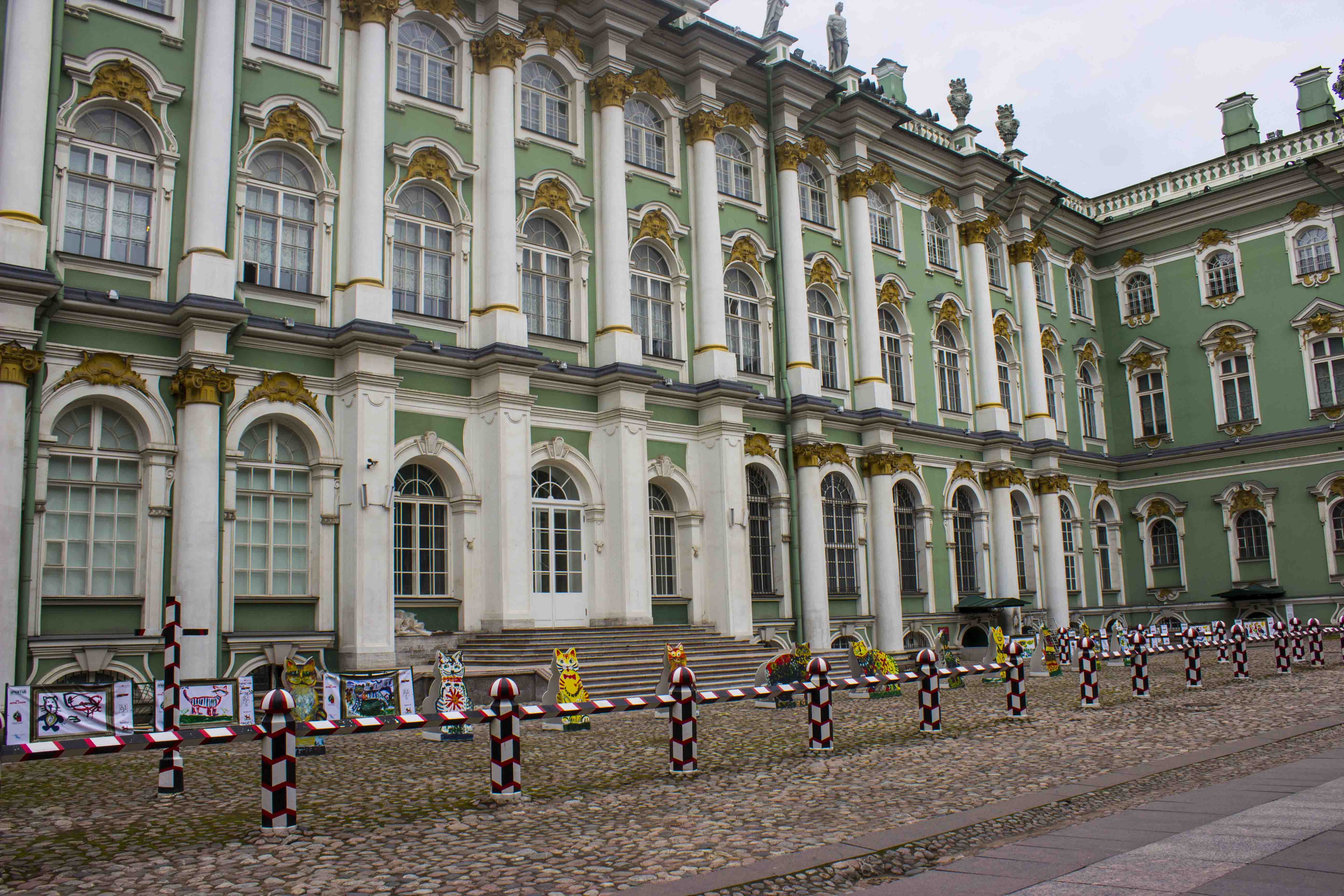 Hermitage is one of the biggest museums in the world. In short, here are located more than 3 million pieces of art in over 1 500 chambers, decorated with gold, precious stones and unique fabrics! 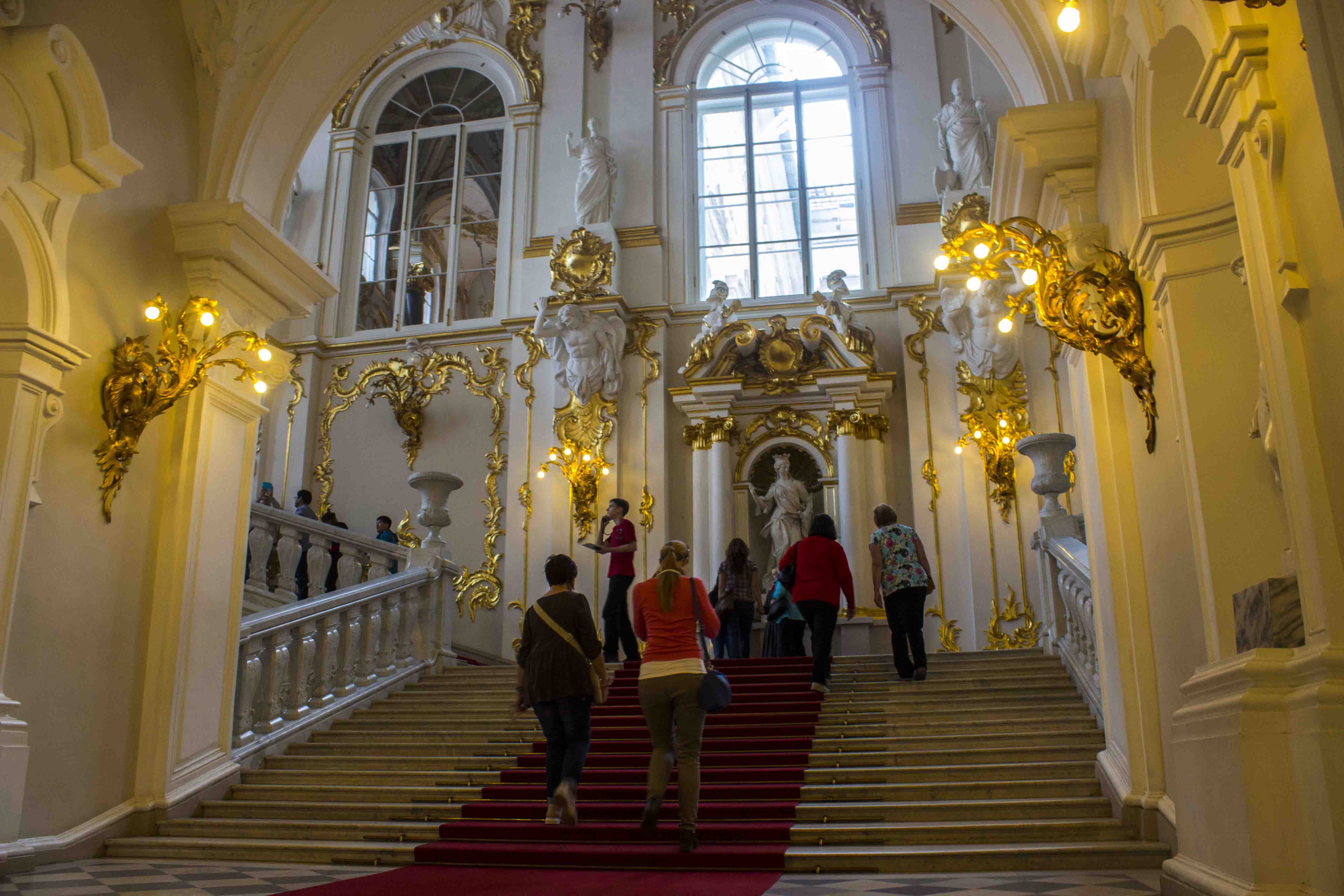 To see everything one can devote several days! Unfortunately we had only a couple hours. 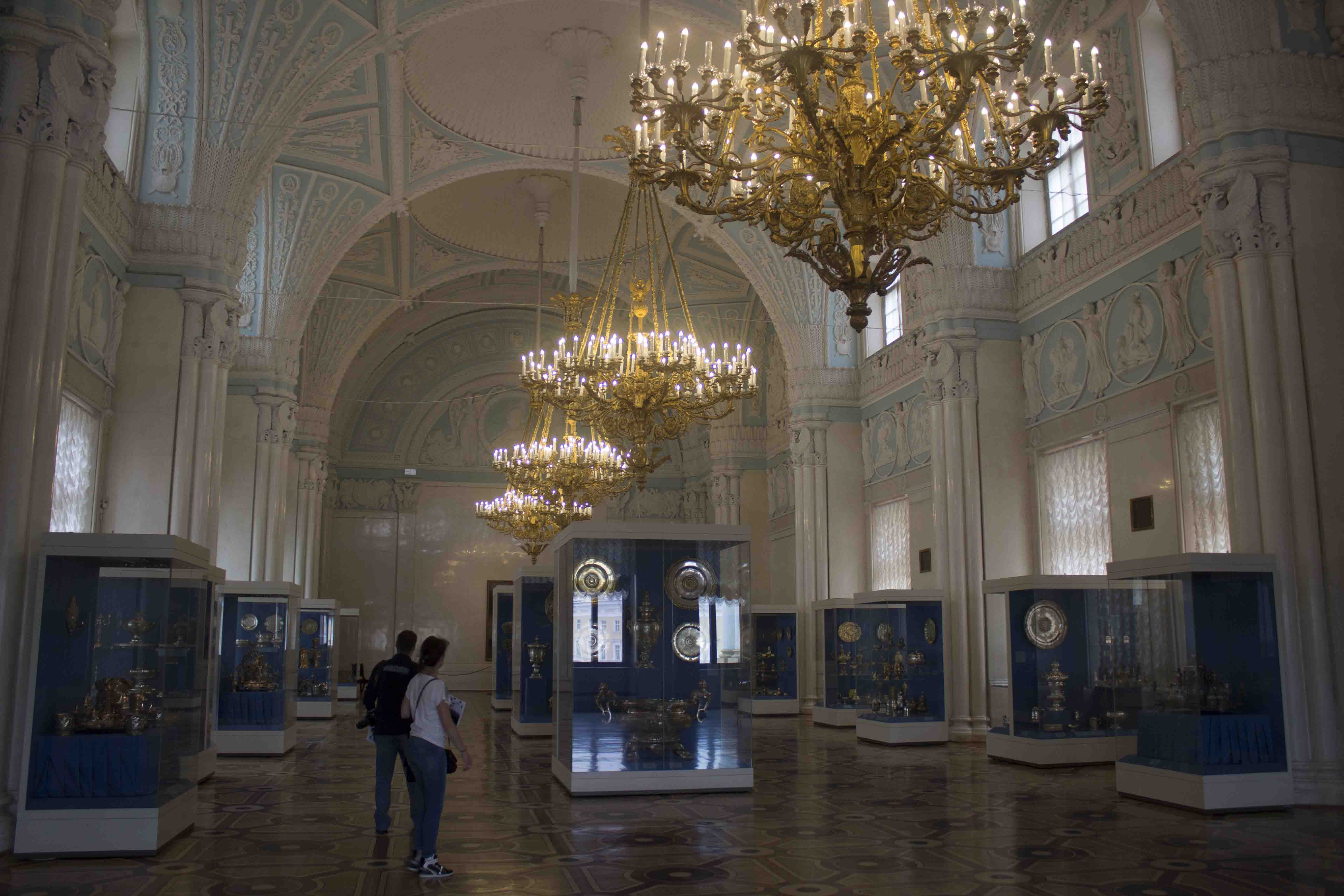 In front of the Palace, there’s an enormous Palace Square with the Alexander Column. It was the place of the most important historic events such as Bloody Sunday or the Russian Revolution. 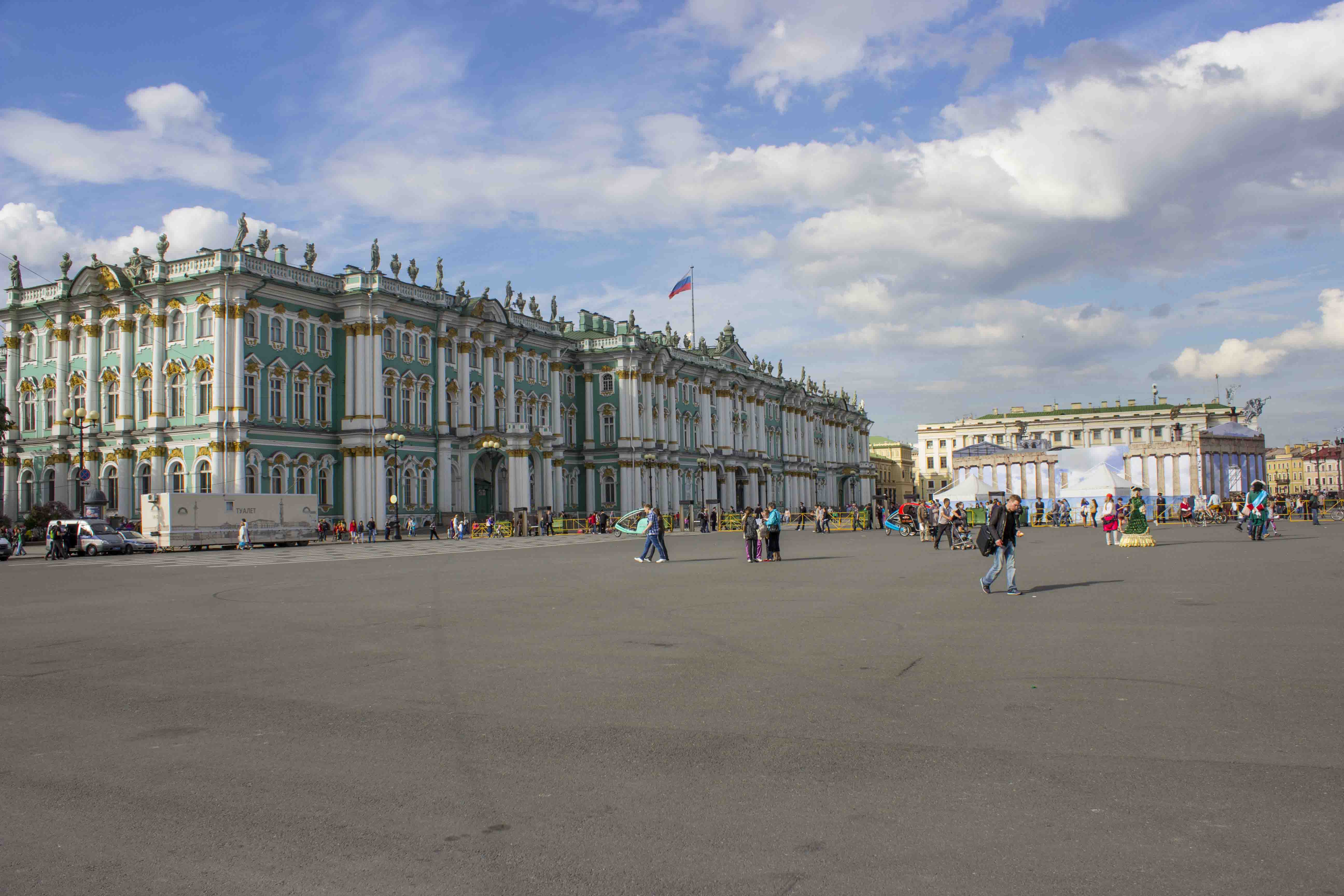 One of the most interesting museums is Kunstakamera. It’s an ethnographic museum which is famous for great collection of souvenirs, gathered by Peter the Great. Inside you won’t find typical holiday souvenirs like shells or postcards but deformed human remains! Peter the Great was fascinated with the genetic anomalies, so much so that he established Kunstkamera, The he displayed not only “scary souvenirs” from his voyages but also exhibits collected on the basis of decree, which imposed to deliver all deformed fetuses from the whole Russian territory. 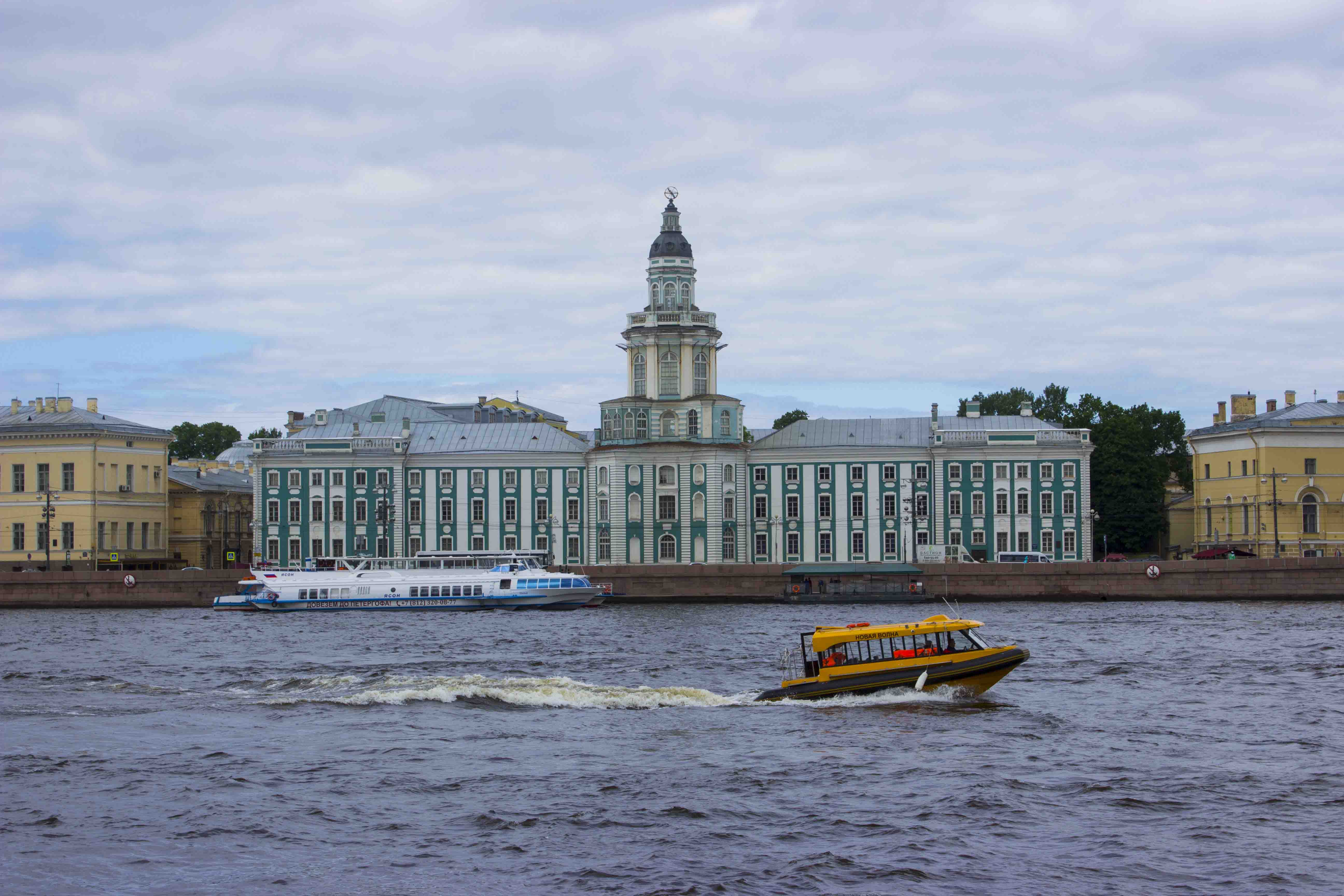 Kunstkamera became famous in view of unusual exposition and free wine which was served there. Alcohol was used to encourage anachronistic Russian society to visit this place. One of the visitors apparently suffered from the shortage of wine and decided to steal one of the exhibits – head dipped in alcohol! Who knows maybe it was the first step towards interactive museum J Unfortunately we don’t have any photo from Kunstkamera, because taking pictures is forbidden there but it’s one of the Petersburg attractions which is well worth visiting. 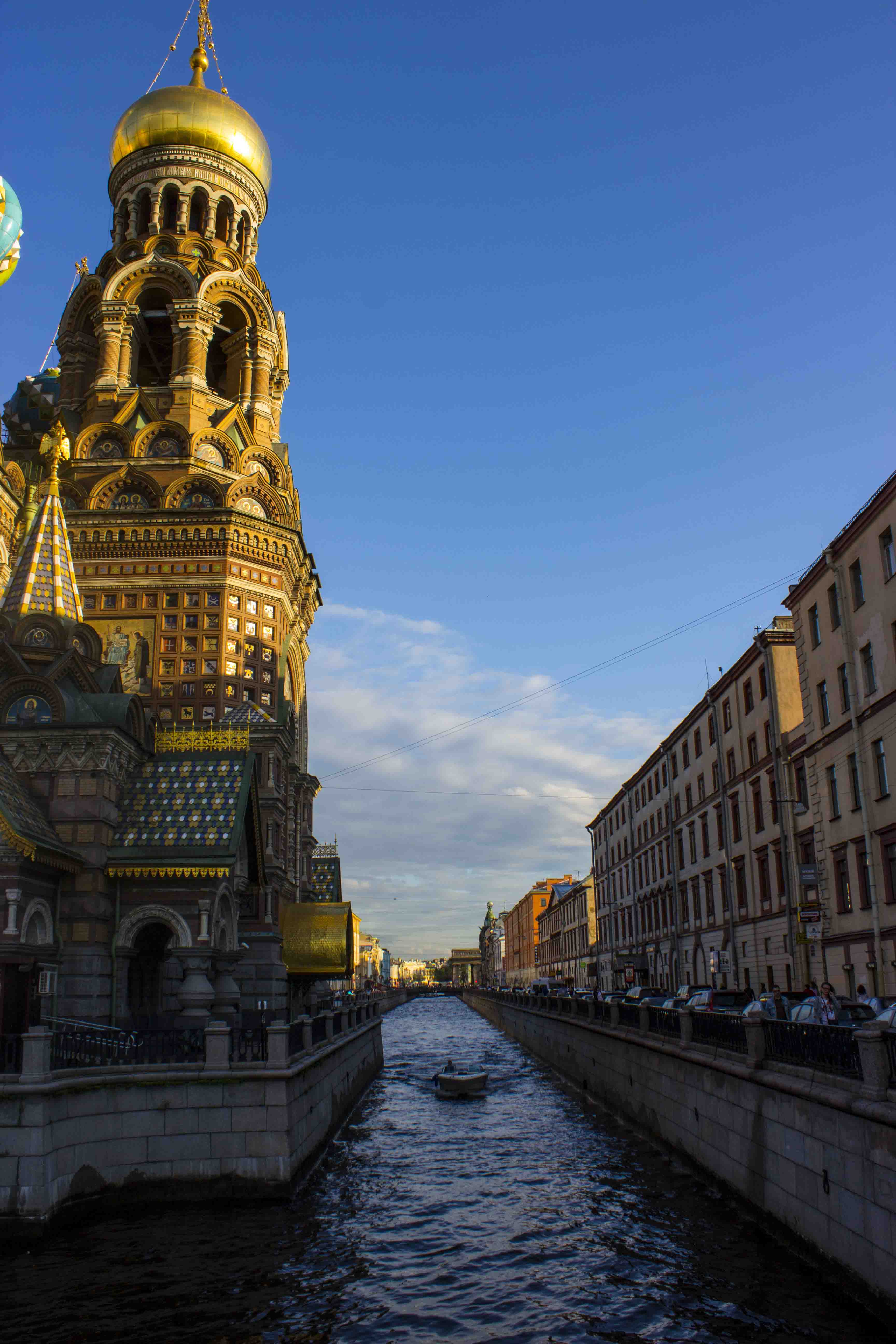 Petersburg is also the city of amazing sacral builings. The most splendid is Kazan Cathedral known also as the Cathedral of Our Lady of Kazan. 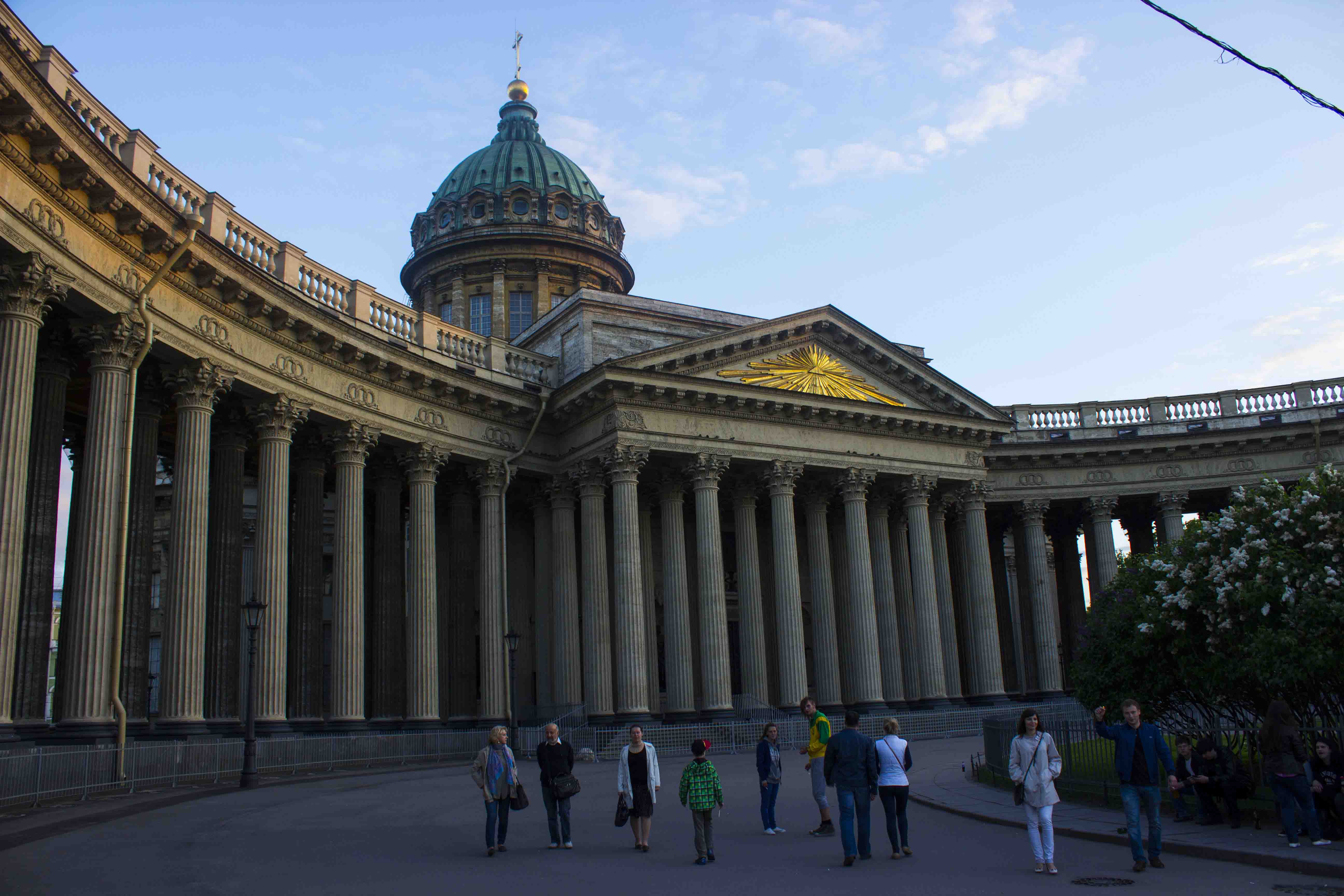 This shrine is the place of worship of Lady of Kazan who saved Russians from the Poles (in 1612) and Napoleon. 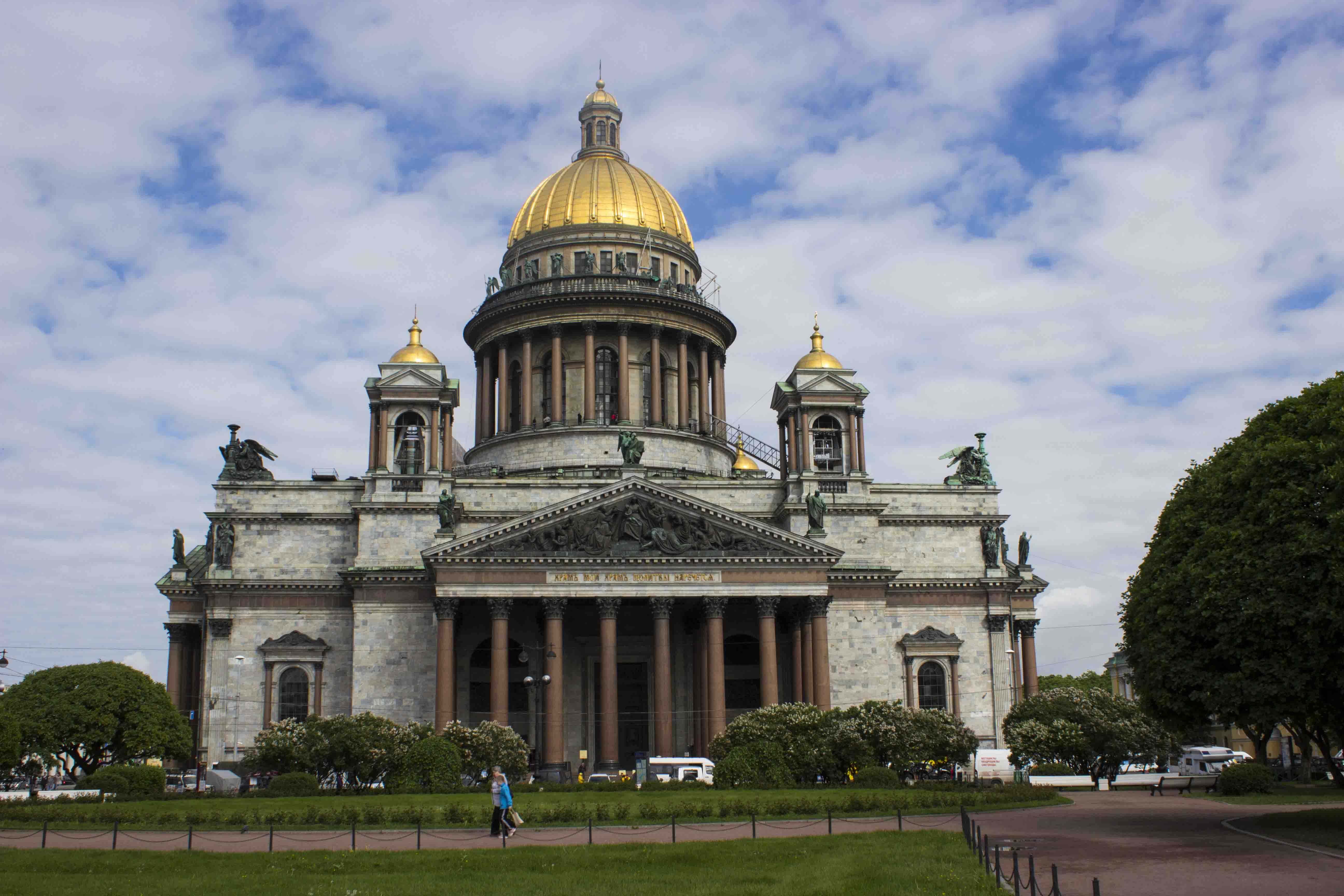 For sure you won’t miss Saint Isaac’s Cathedral – the most characteristic cathedral in Sankt Petersburg. It outshines famous Winter Palace in view of its cupola covered with 100 kg of gold. Additionally it’s one of the biggest in the world just behind the St. Peter’s Basilica in Vatican and Santa Maria del Fiore Cathedral in Florence. 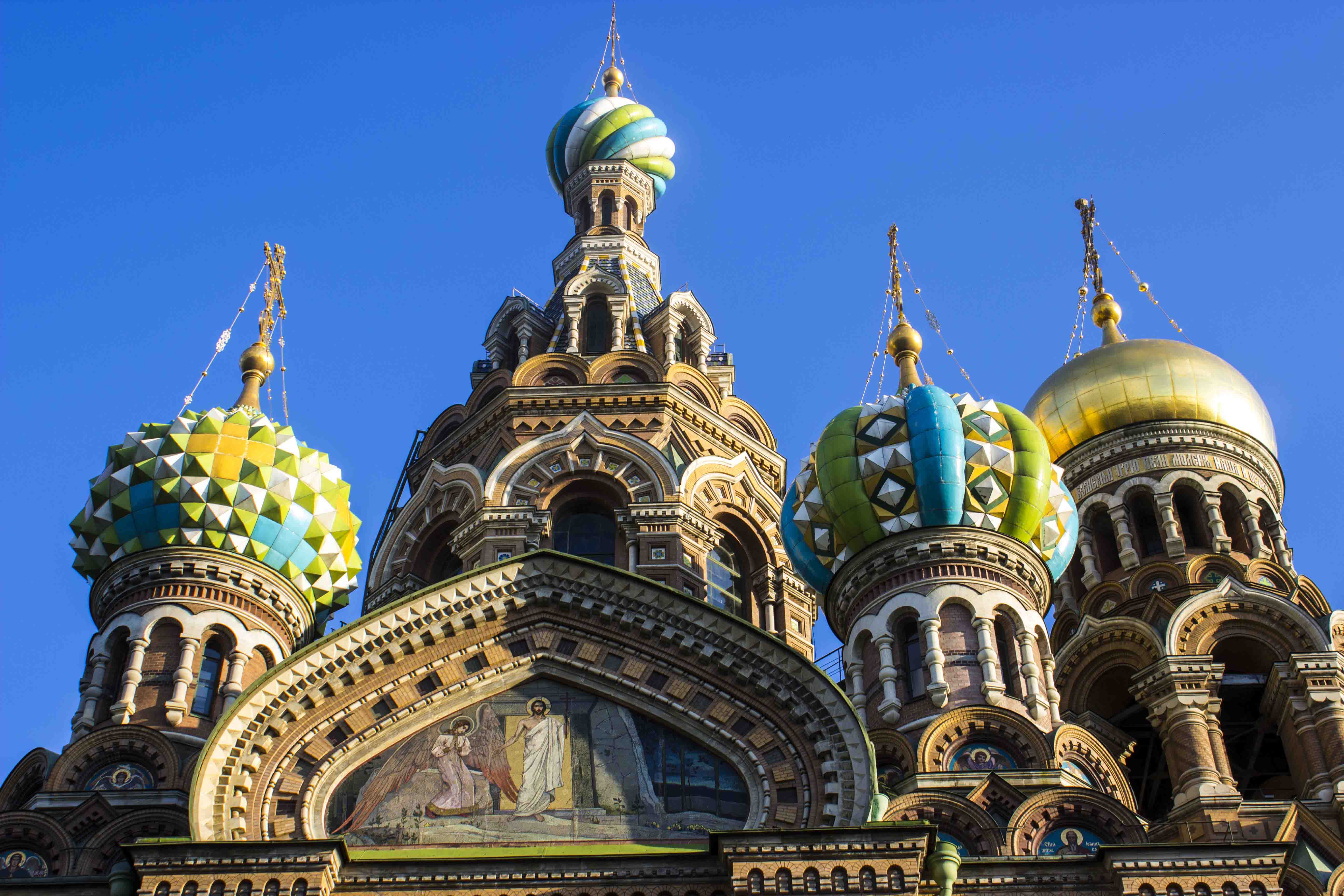 At the end of the trip, there’s also another must- see attraction – Cruiser Aurora. To tell the truth, this questionable symbol of the Russian Revolution is famous for being famous. Contrary to Bolsheviks propaganda, famous missile shot wasn’t the signal of the revolution. Nevertheless to our mind it’s well worth seeing this legend. 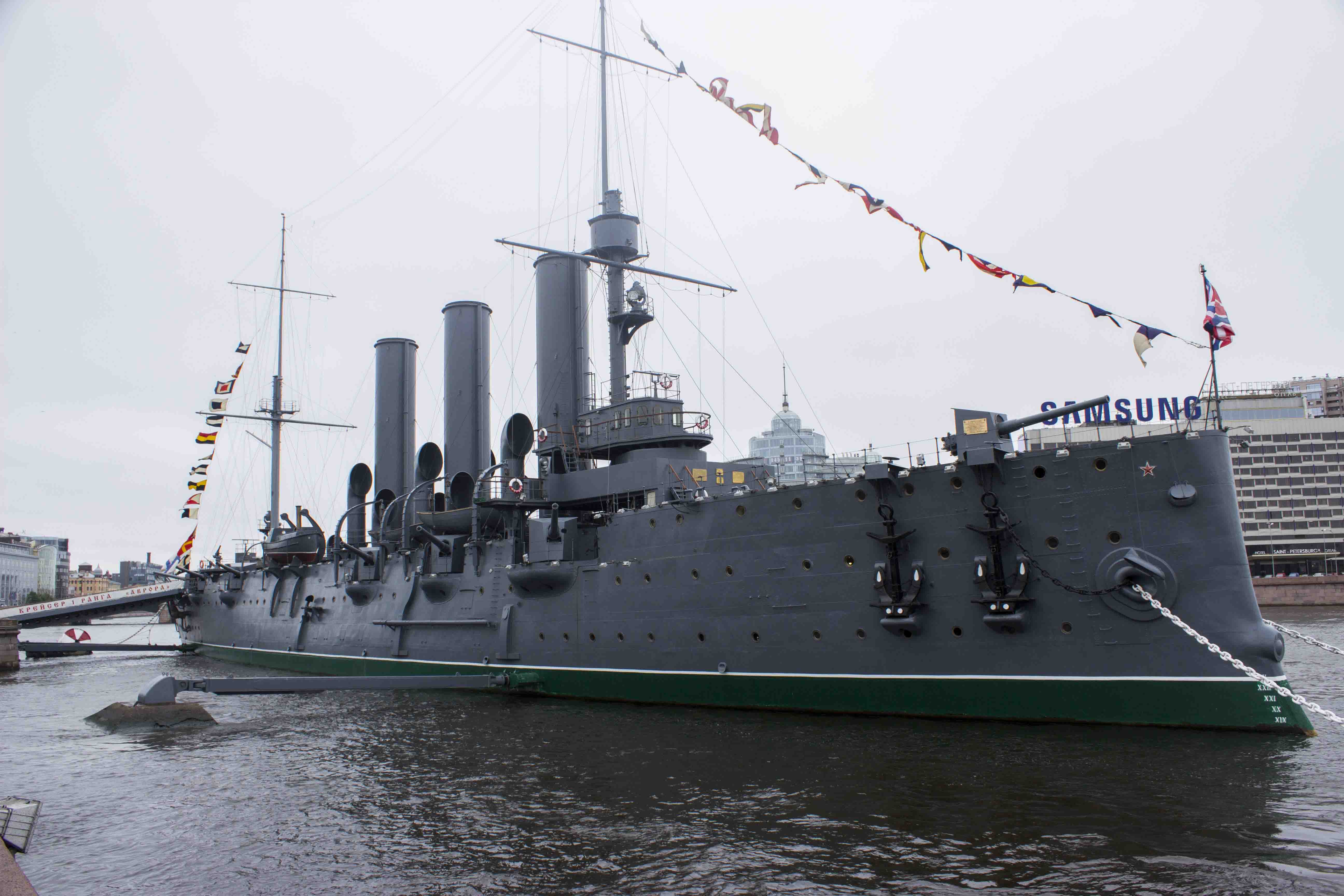 The capital of Russia, less serious side of
prev next