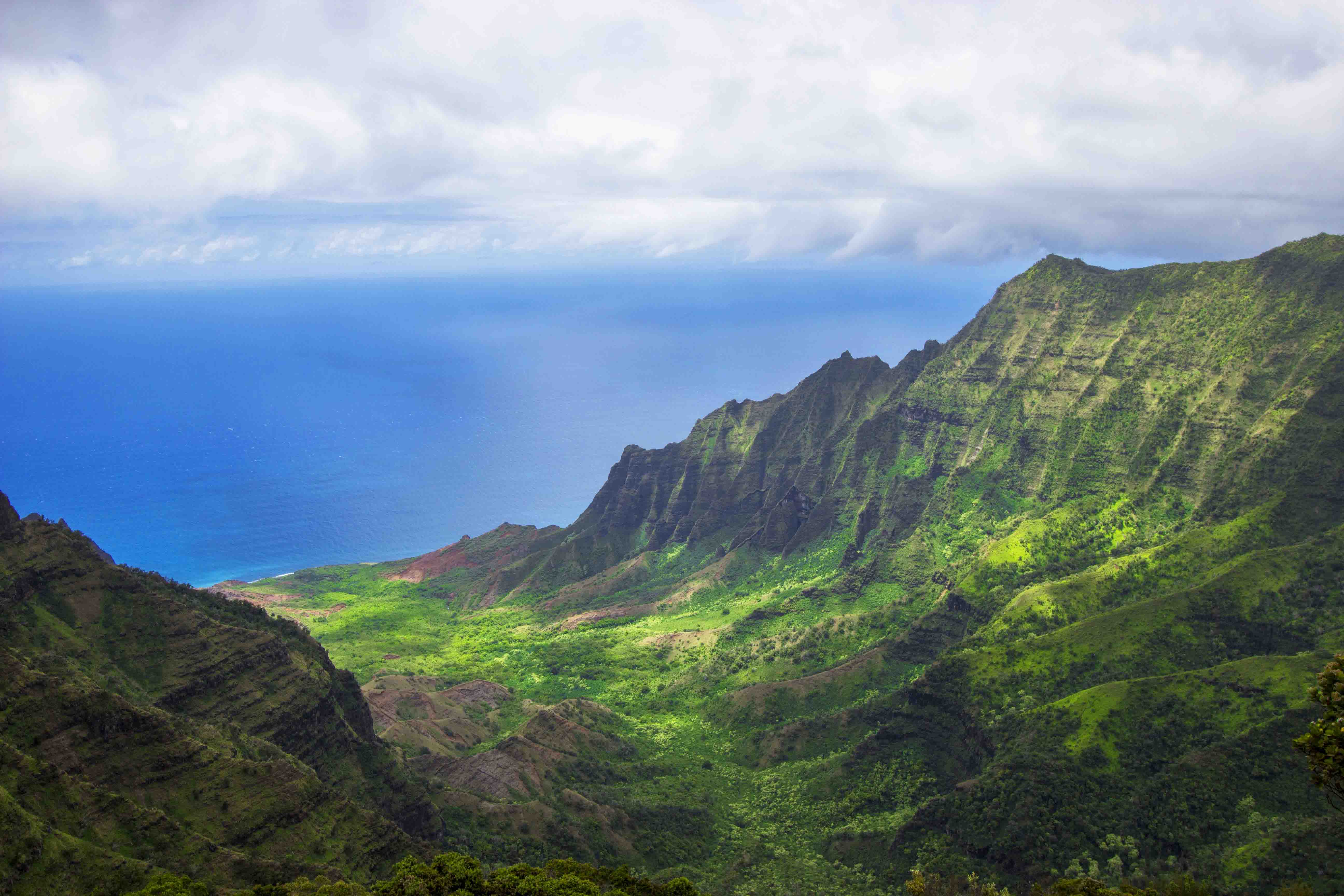 My love for the mountains has started since the moment I made the first step. Every holiday I used to spend with my father traversing mountain trails. These vacations were so much so that monothematic that in fact I went to the seaside at the age of 14. To some extent these experiences have formed my stubborn character. They also helped me to distance myself from some bad experiences which are sometimes beyond control. 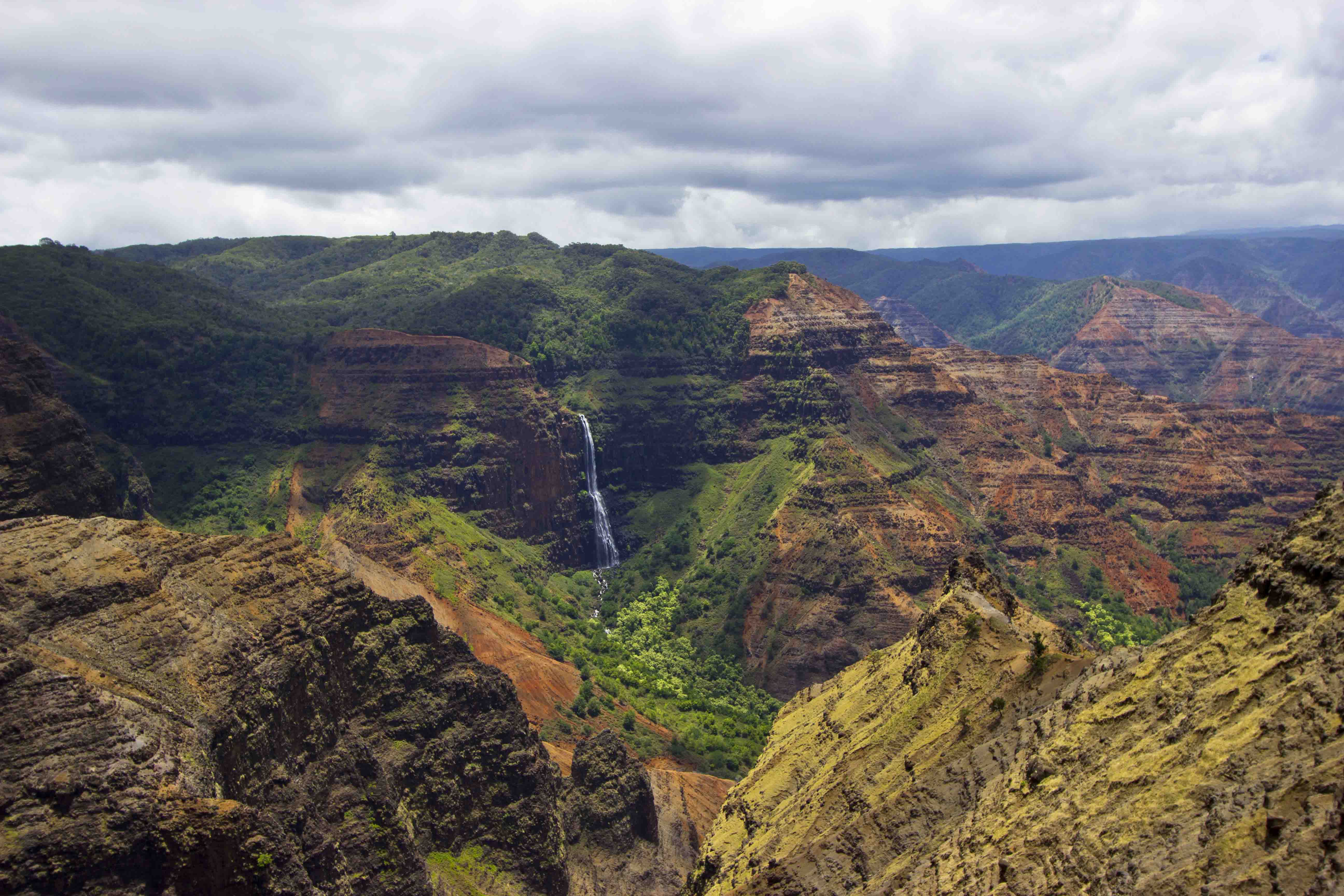 Mountains hide incredible mystery, beauty combined with nature unsteadiness, admiration co-occurring with thrill and what’s the most important: climbing effort rewarded by amazing views. It’s no wonder that before my trip to Hawaii, I knew that Kaua’i Island would be one of “these” places. This island with the population of 60 thousands residents and the area of 1,4 thousand sq m is relatively small but it hides spectacular, even surrealistic landscapes. 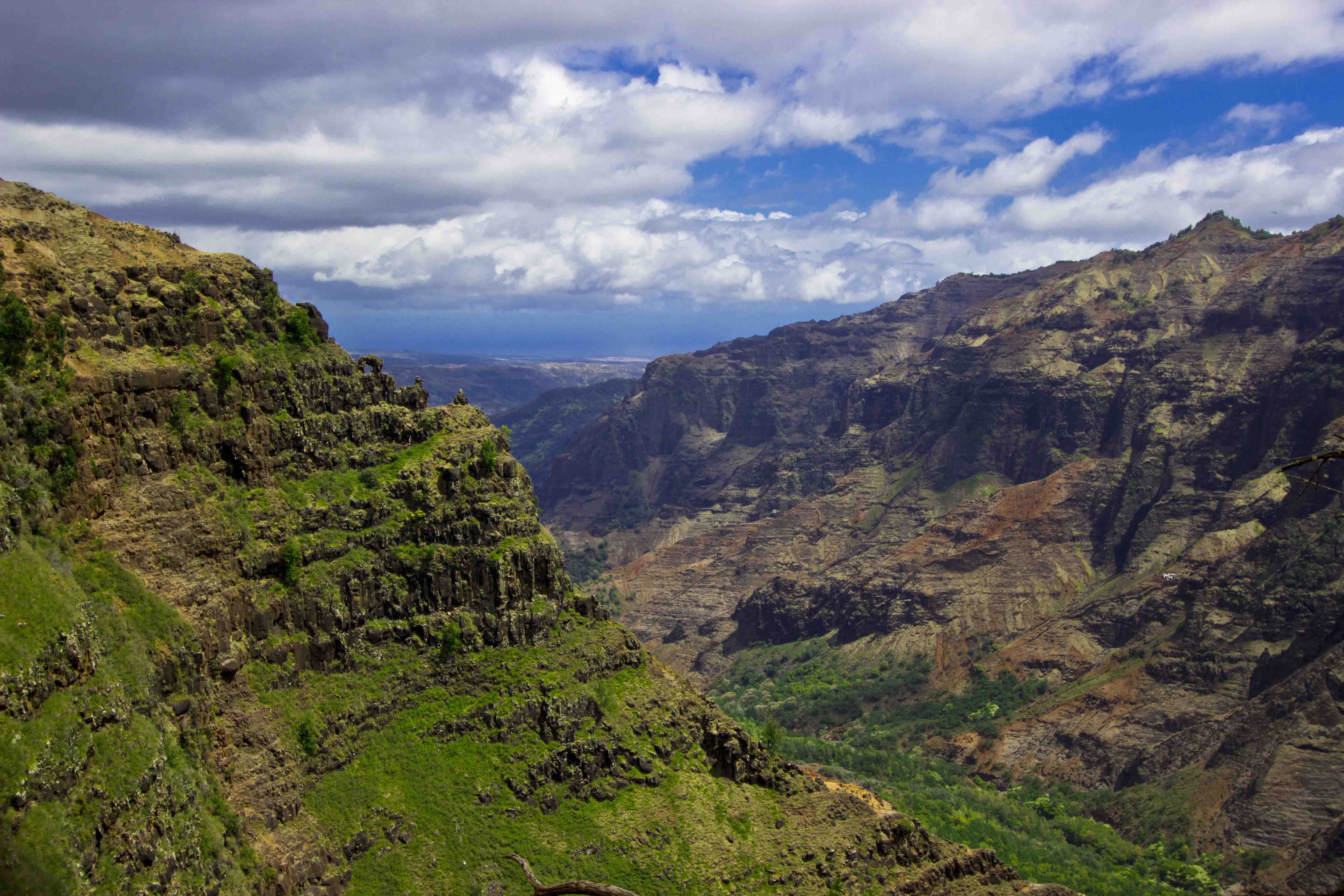 Here you can find everything, starting from steep cliffs look like cut almost by godlike intention, huge waterfalls and ending with wonderfully carved valleys. To top it all off everything almost sinks in the lush greenery. Justifably Kaua’I is called The Garden Island. One of the main tourist attractions is Waimea Canyon. 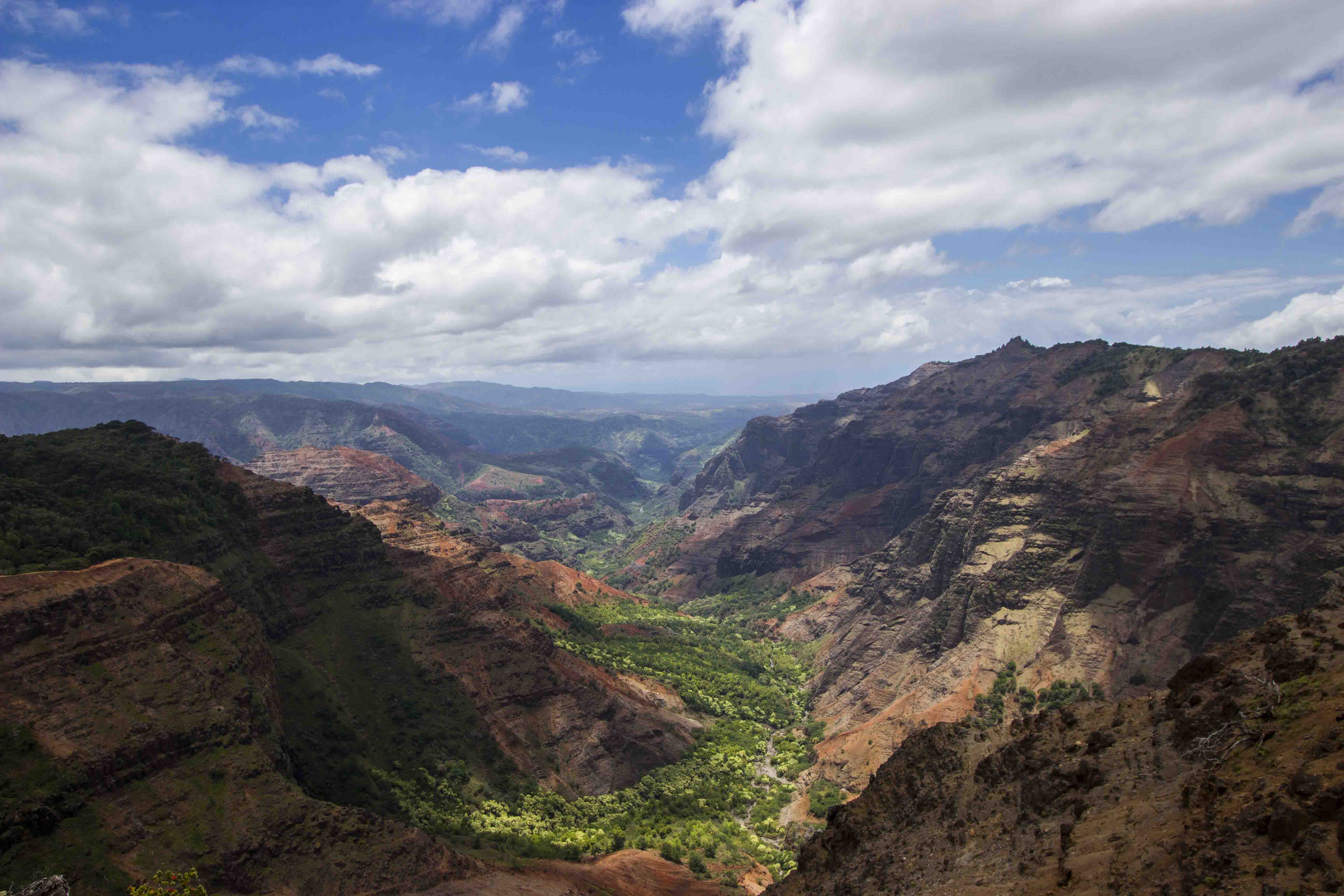 It’s approximately 16 km long, 2 km wide and up to 900 m deep. Although its relatively small dimension, it is called The Grand Canyon of Pacific. This natural wonder was created around 5 million years ago by the process of volcano collapse. Lava flow almost intentionally formed horizontal stripes on the crater walls. The rest of this magnificent creation was made by erosion, mainly in form of the floods which went down from the peak of Waialeale mountain. 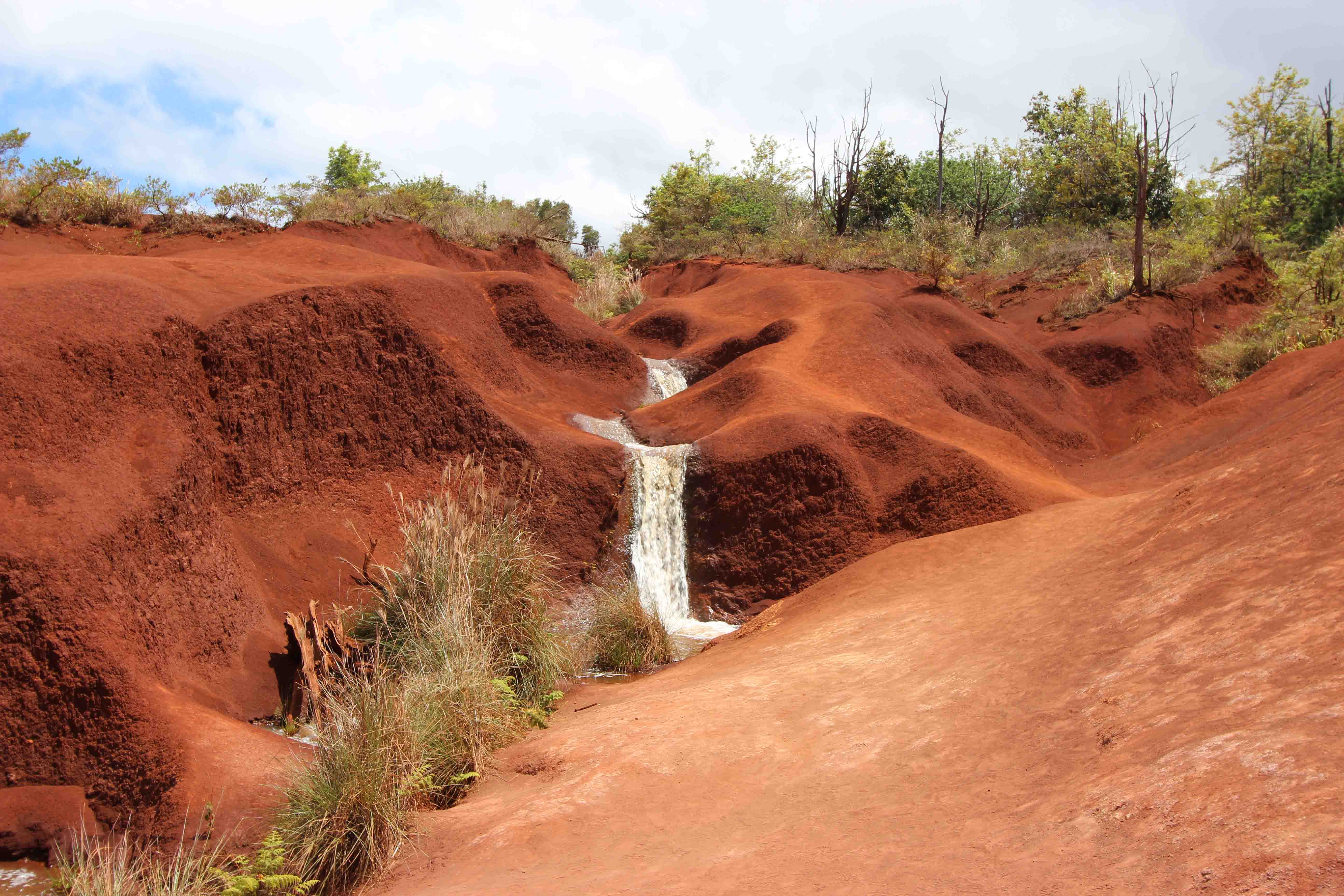 Waialeale Mountain with an elevation of 1569 m is the wettest place on Earth. Annual rainfall reaches here approximately 12 000 millimeters. Waimea in Hawaiian language means “red water” but besides red color it stuns by its orange, yellow, green and brown shades. 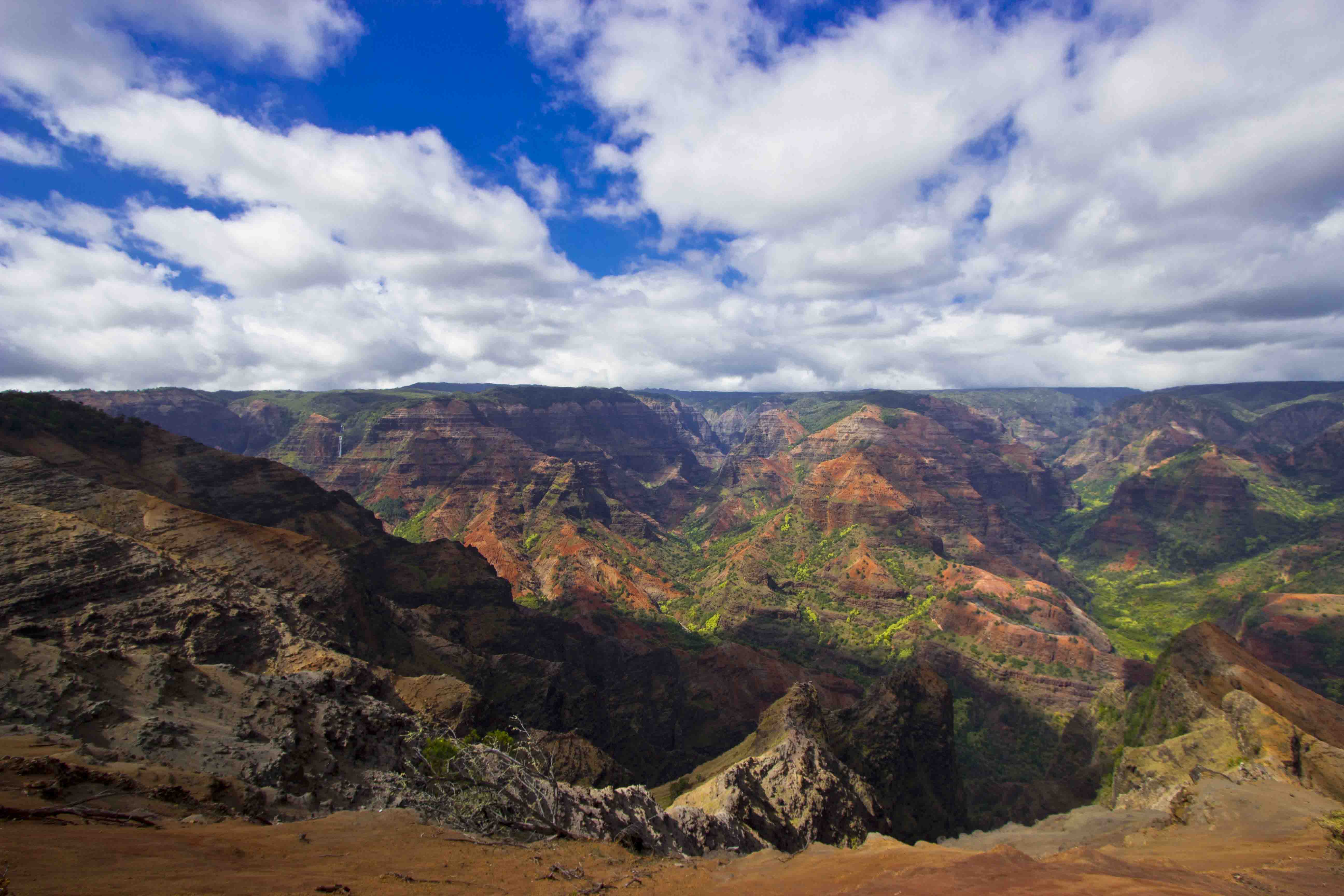 We can reach it by serpentine Canyon Drive. There are a lot of vantage points along this way. The most beautiful are: Waimea Canyon Lookout, Pu’u Hinahina and Pu’u O Kila Lookout. But nothing compares to “meeting this phenomenon face to face”. 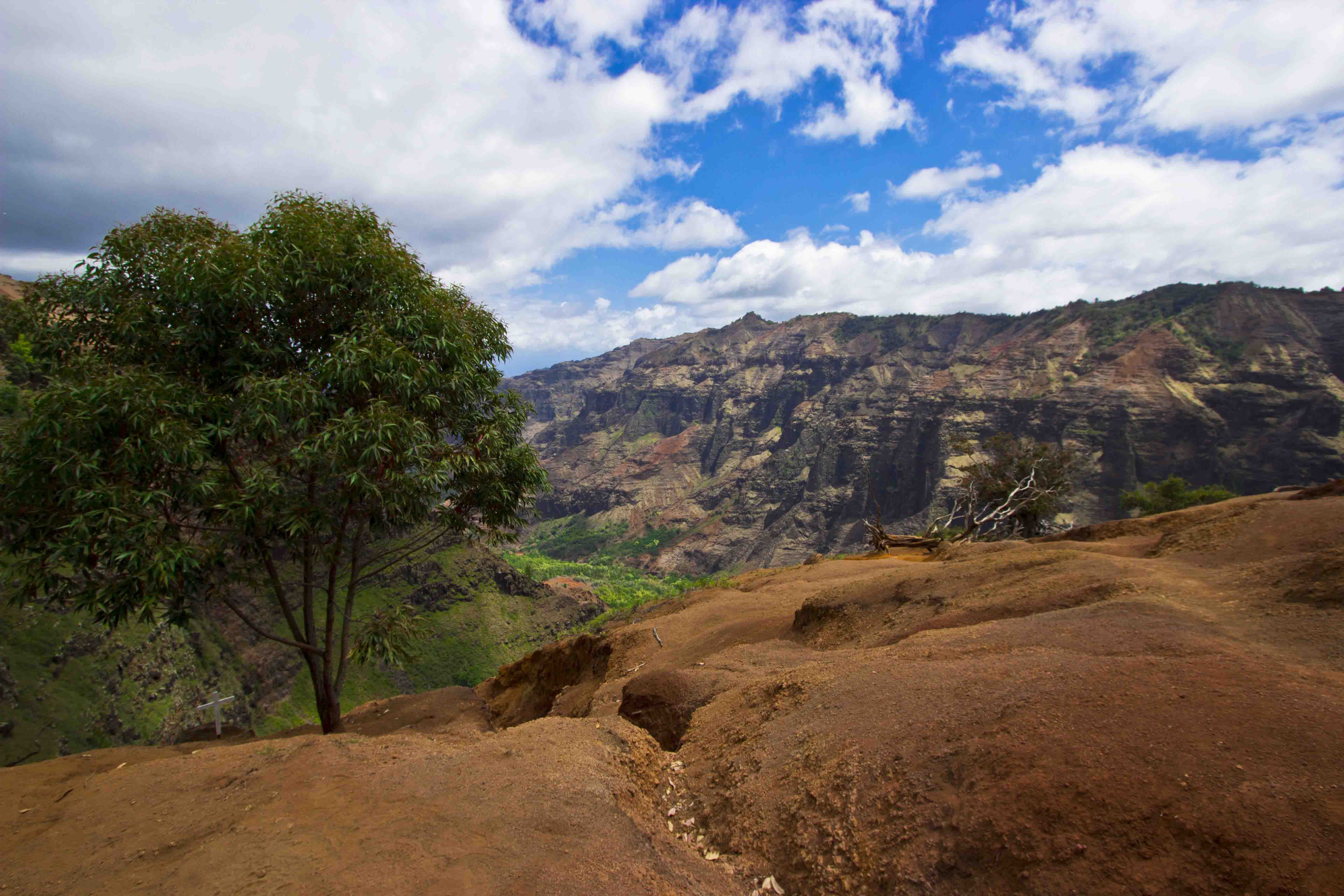 The most popular and beautiful is Canyon Trail, starting from Pu’u Hinahina Lookout. It’s quite easy trail. It takes 2 hours and leads to Waipio waterfalls. Just before the waterfalls there’s a short but very steep slope. Walking there after rain can be  really dangerous and it can lead to fast and close “meeting” with the canyon floor. 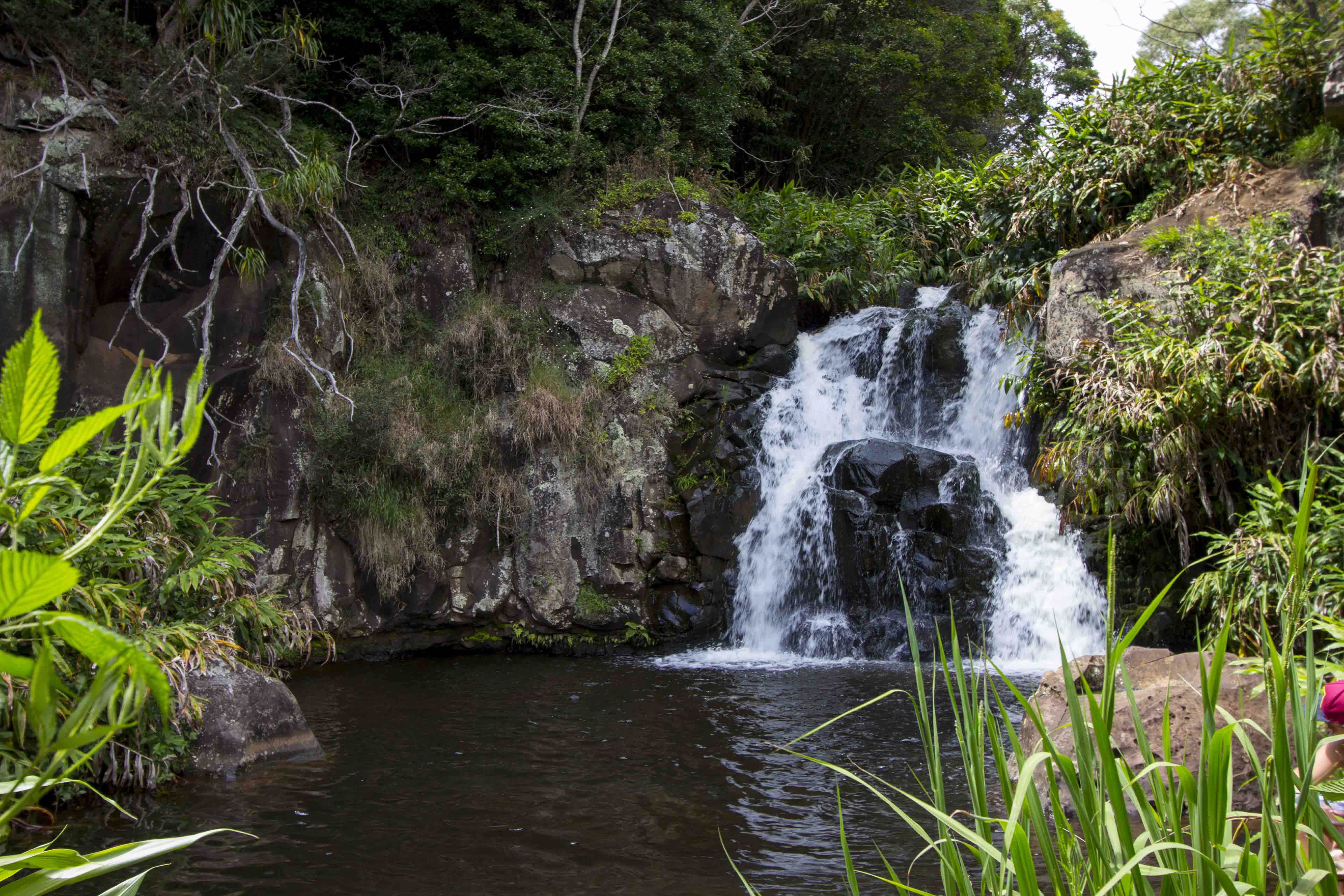 After crossing this slope ironiccaly it can happen that you won’t see the main point of this trail – Waipio Falls because of the rainfall shortage. But in my opinion these waterfalls are not as spectacular as the whole trail winding along amazing canyon walls. 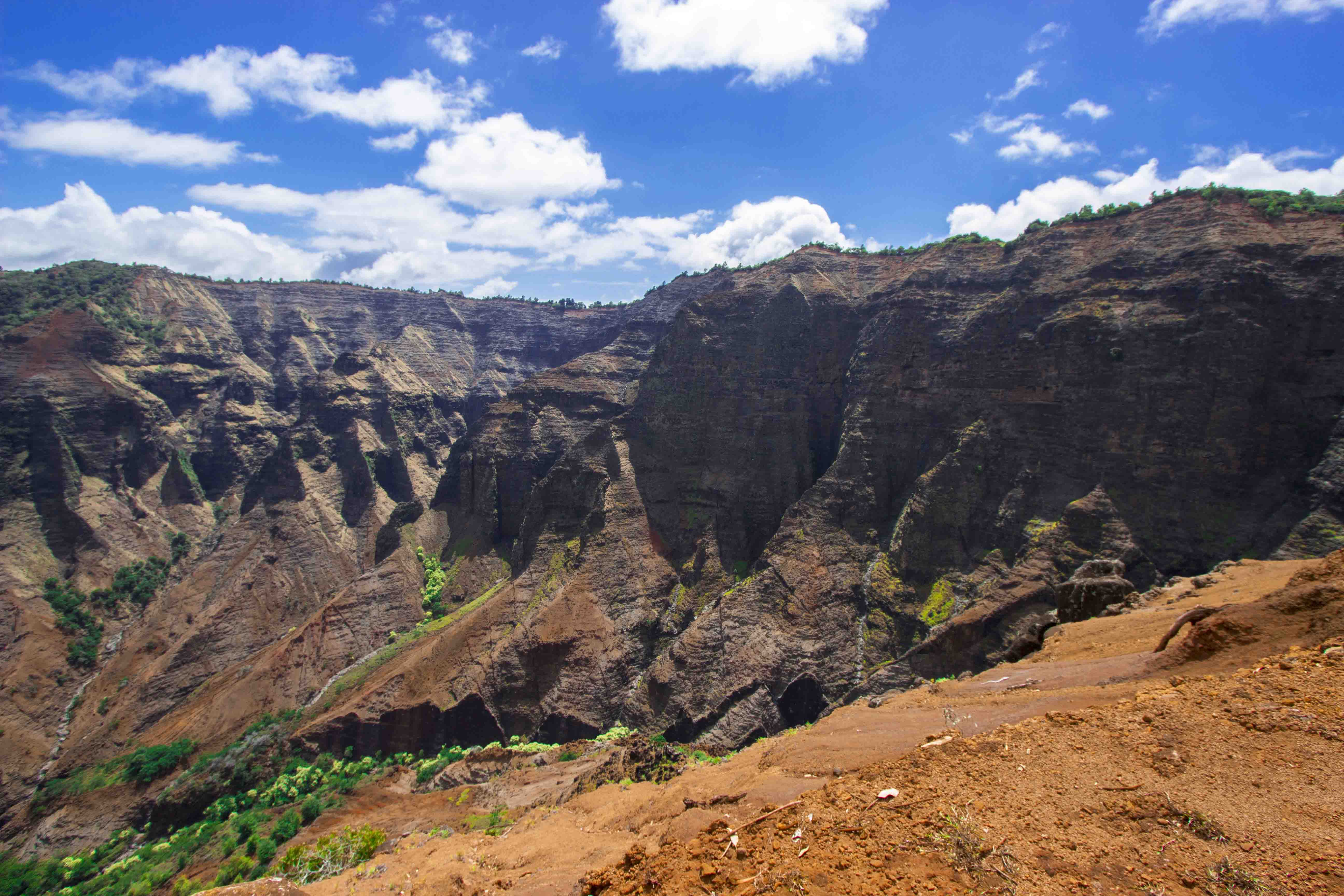 Views from its peak are amazing and seems even unreal. 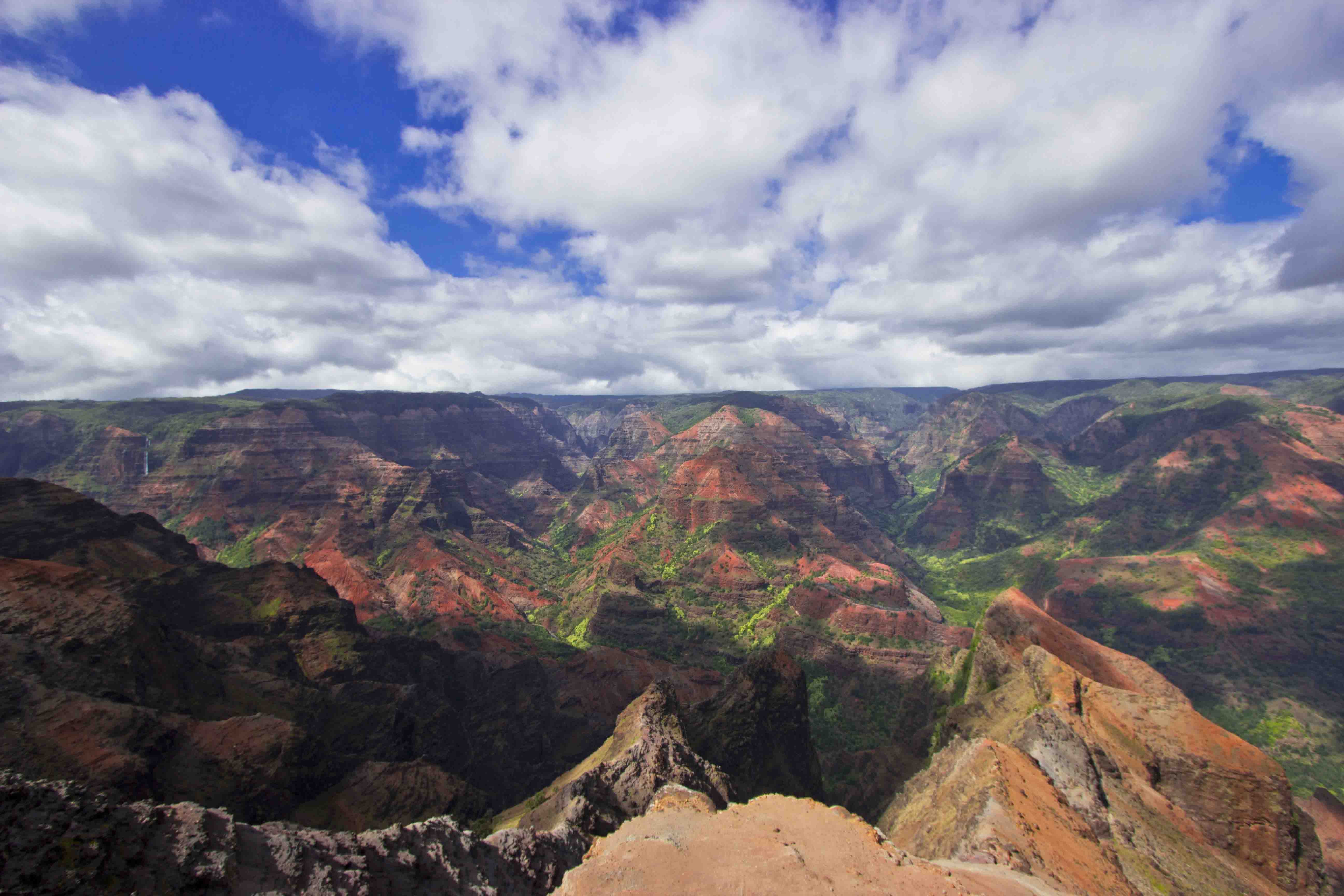 Hawaiian cuisine part I
prev next

Pearl Harbor – “AIR RAID PEARL HARBOR THIS IS NO DRILL.”