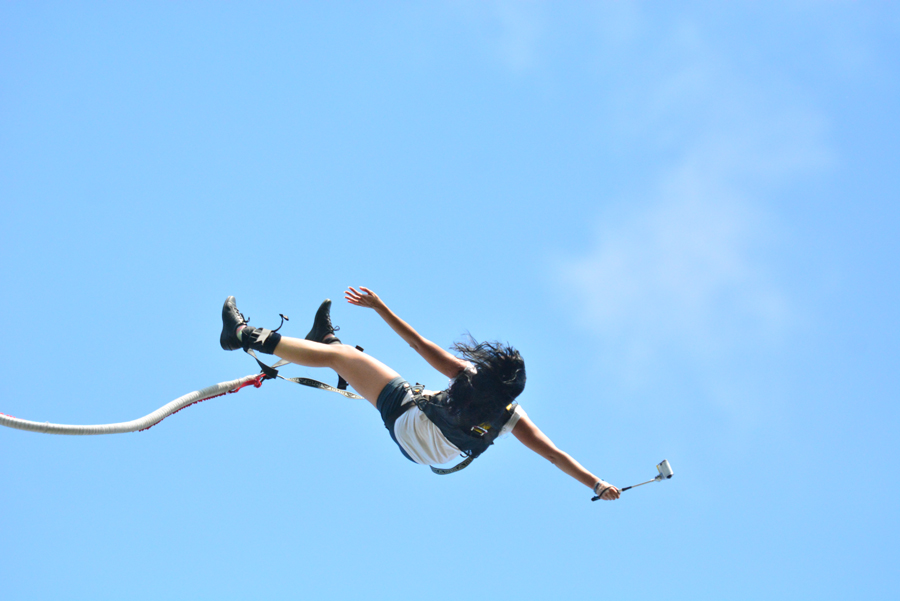 Everyone has had a falling dream even once. I’m not superstitious and I don’t believe in dream interpretations but reportedly it connects with an anxiety of losing control over a particular aspect of  life. Fortunately I’m unfamiliar with such dilemmas but on the other hand lack of control of situation makes our life diversified and fascinating. 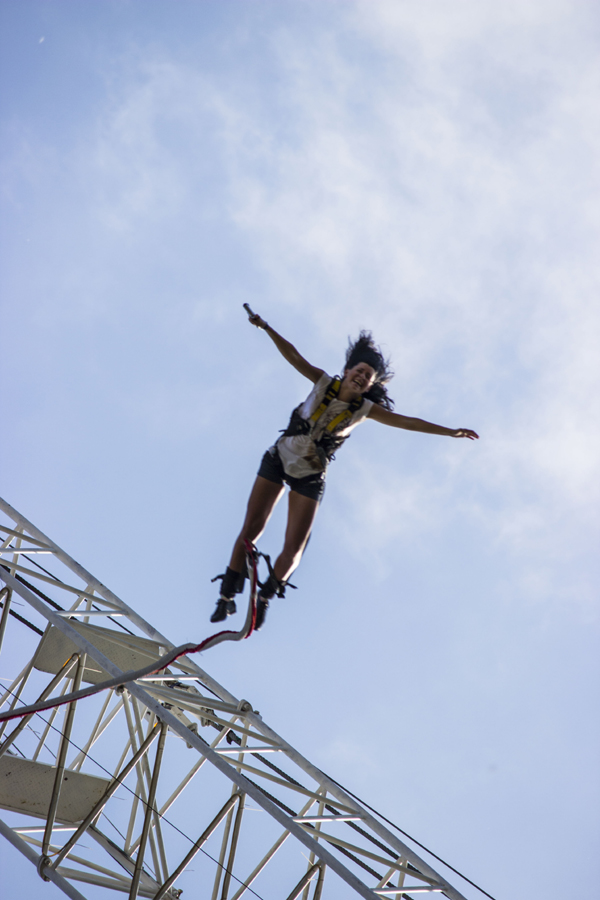 Once in a while I realize that I need something new, unusual which will stick in my mind forever. Although I don’t like such dreams I’ve decided to try it in practice. 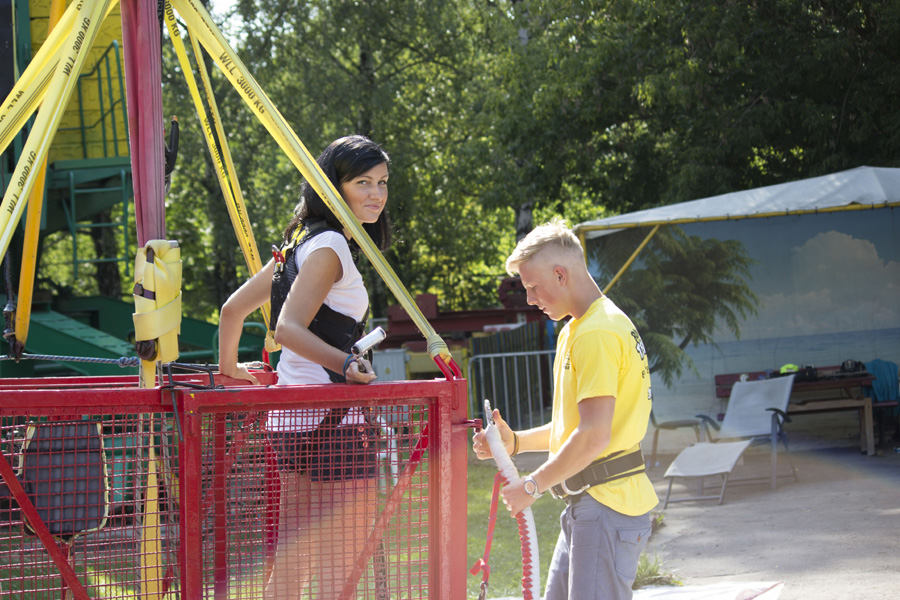 The main difference between bungee jumping and falling dream is that the anxiety transforms into devouring fear and a lack of control regards not just one but all aspects of life. 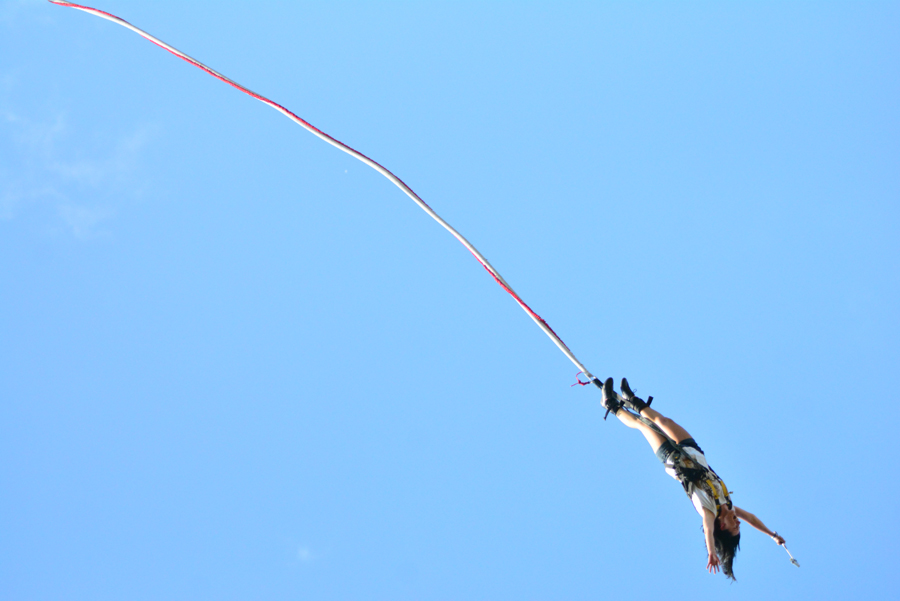 But maybe I will start from beginning. This memorable “escapade” wasn’t my first adventure with air acrobatics. It started harmlessly from several abseils from bridges in Stanczyki near Goldap. It was really nice and relaxing experience. I had full control of the abseiling speed and I could stop every time when I wanted. Levitating several dozen meters above ground I was able to feel THIS space. 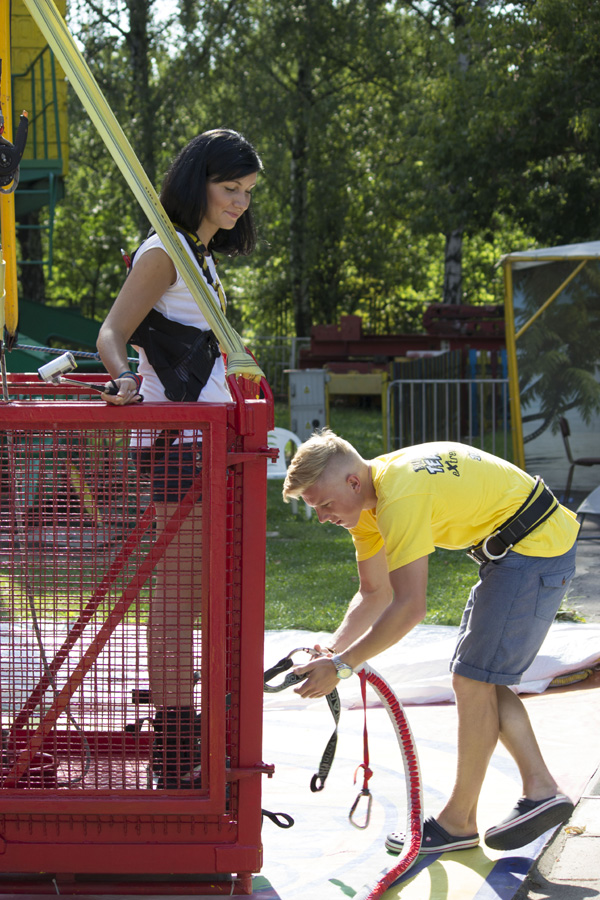 The situation wasn’t strictly comforting as it was organized by my friend whose acquaintance with this “discipline” was restricted to the fact that his father was a roofer. This activity was also forbidden there in view of a poor condition of the bridges. 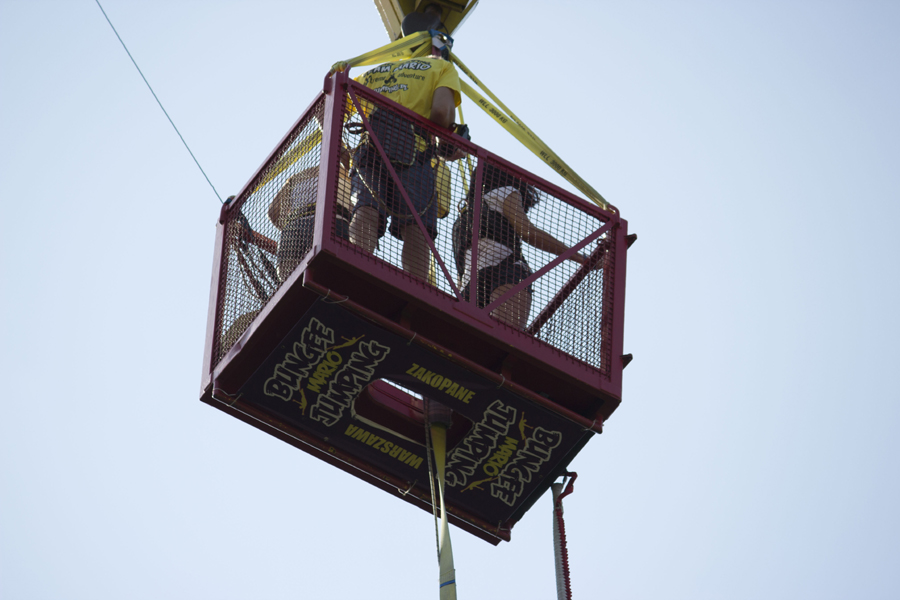 Later, during my studies I was working at a company which organized integration parties. During one of our trip to Jura Krakowsko – Czestochowska we organized bungee jumping as a one of activities. 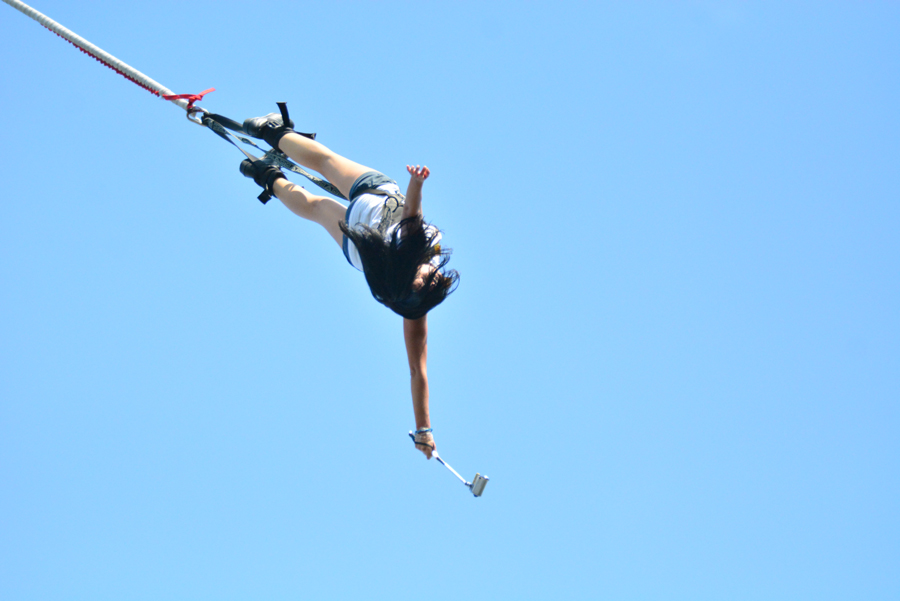 During assembling equipment, I told my boss that I would like to try it. Unfortunately I didn’t expected that I would have a honor to test that equipment as a first person! Well the word was said so I only had to pay the price for it. Another lesson to remember that firstly I should think, next say and in the end do. 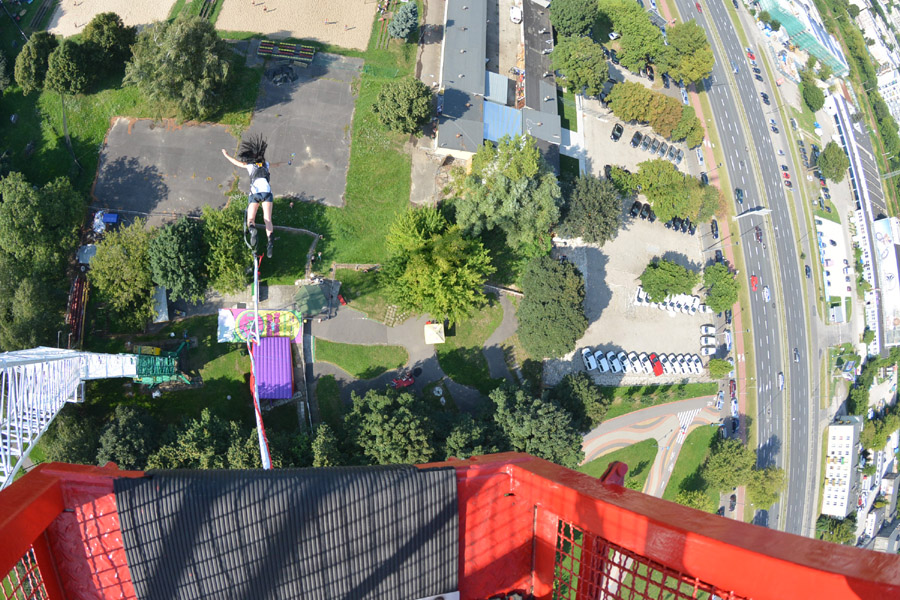 But bungee jumping requires an absolute reversal of this order. You should put your common sense aside and just jump. My clinical case was special as I stopped thinking, jumped from 60 meter high crane and  lost my tongue. By the way, I learnt the hard way the accuracy of the saying “to be weak at the knees”. This experience was compartmentalized to the category: “done and ticked”. 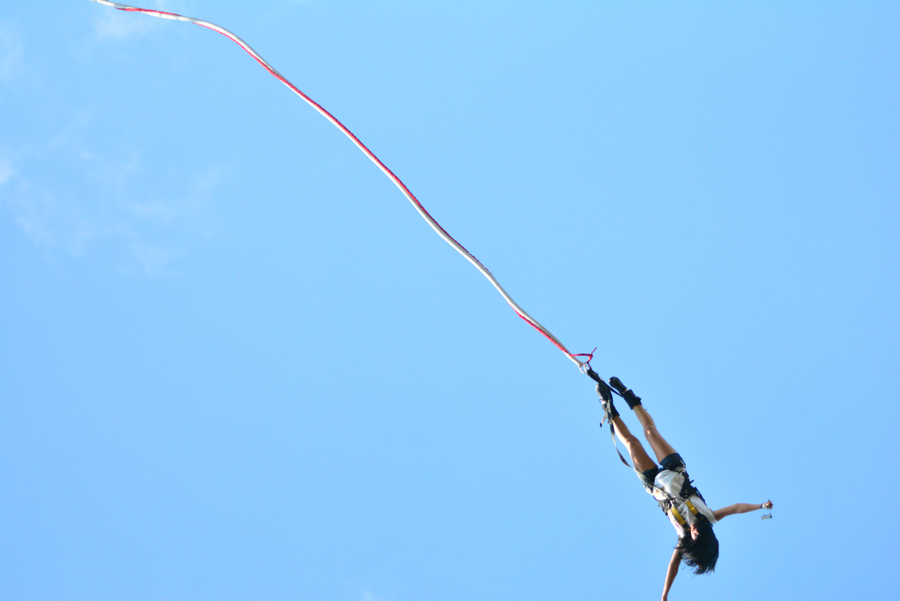 Unfortunately, some years after, emptiness of my head was overcome by THIS thought. I decided “to raise the bar” and jump form 90 m in Warsaw. You may think that second jump is a piece of cake but regrettably it isn’t. I had to encounter with my biggest opponent – full awareness how it looks like! 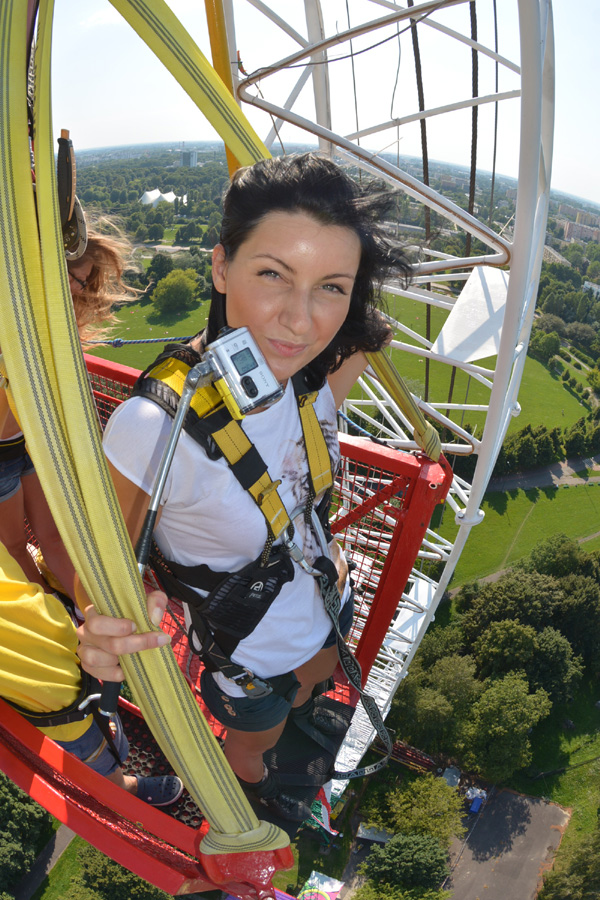 After fast formalities, like signing declaration about my health condition and so on, I stood on the edge of swinging cage and I did something which I shouldn’t have done… I started analyzing my situation. My brain started encompassing all mysteries of physics and every meter from the top to the ground. 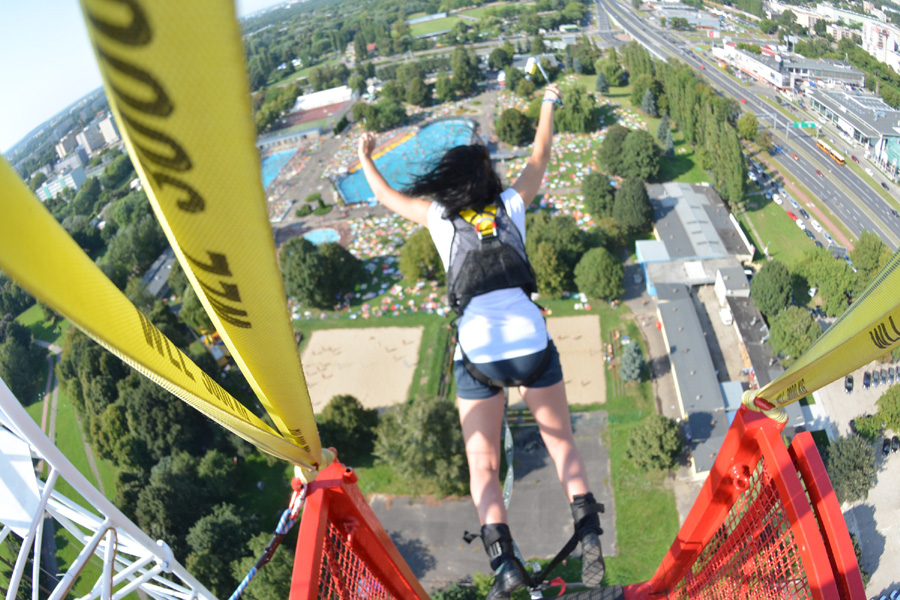 I realized that attempt of a rational thinking was a little bit ridiculous when I was standing almost 100 meters above the ground and pinning all my faith on the rope attached to my legs. I stopped thing about the jump and focused on horizon and beautiful panorama of Warsaw. I didn’t feel the height then. If not for this harness which was mercilessly pulling me down, I could admire this view for hours on end. 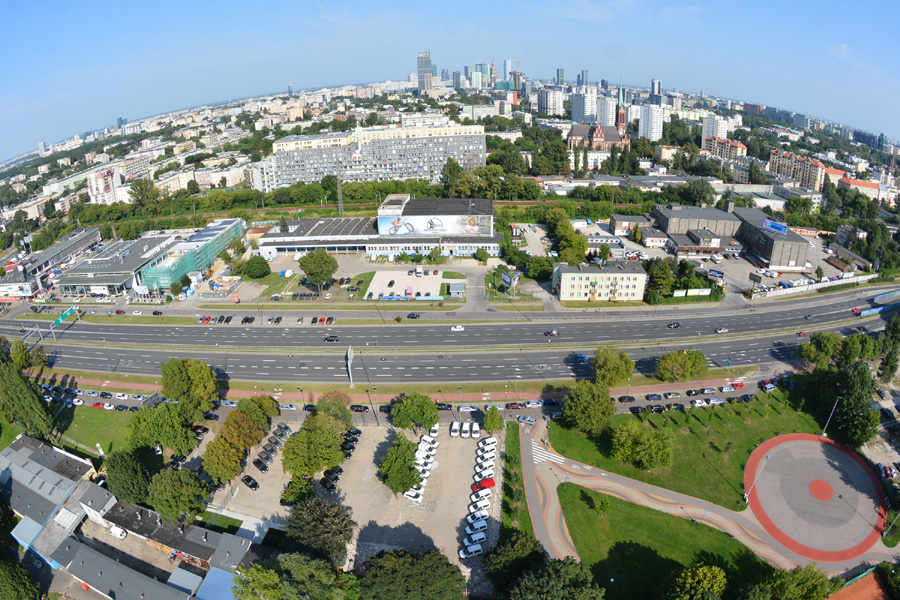 I gathered myself, inhaled some fresh air, tipped forward and winged my way down. The ground started approaching really fast, scream was futile, speed and the rush of the air led to apnea and unfortunately my stomach wasn’t my ally. Full lack of control over the body and situation triggered off more adrenaline explosion than adrenaline rush. My mind tried  to find a way to escape, but it was all in vain. Finally I could hear the rustle of stretching rope, the situation seemed to be in hand but then I felt a strong jolt and went up very fast. I had one thing in my mind, if the rope was falling with me or next to me. That falling was a little bit shorter.

But why did I do it? 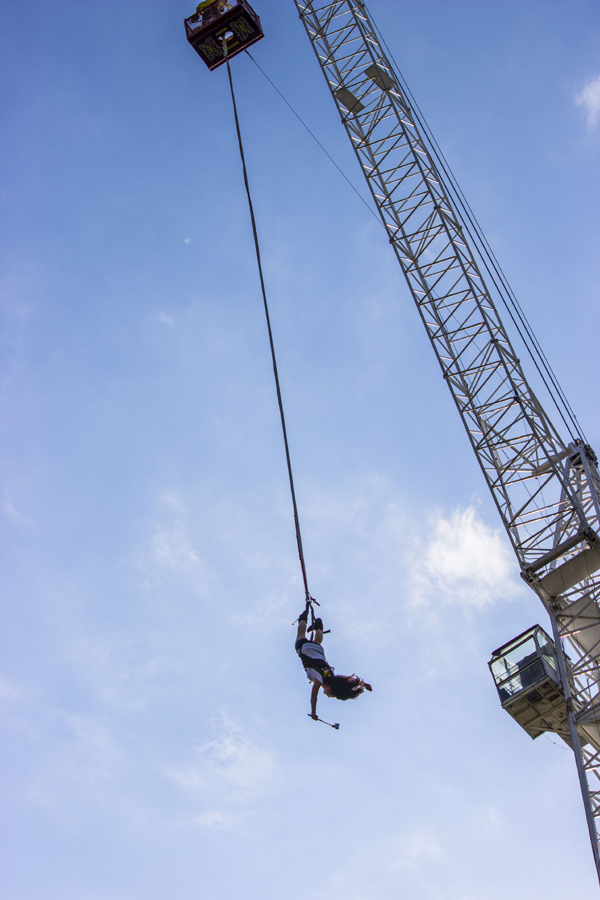 I don’t have suicidal thoughts but I have progressive fear of heights. Moreover the longer I live in this beautiful world the more I realize that day by day I have more to lose. It sounds a little bit ridiculous in context of the article on bungee jumping but this experience is something extraordinary which prompts me to live and feel. THIS feel of a space which I cannot describe, listening the heartbeat, fear connected with fascination are beyond compare to any other feelings which can be imagined. Finally the satisfaction that I managed to do it. I know that I will do it once again, all in all I must improve my technique 😉 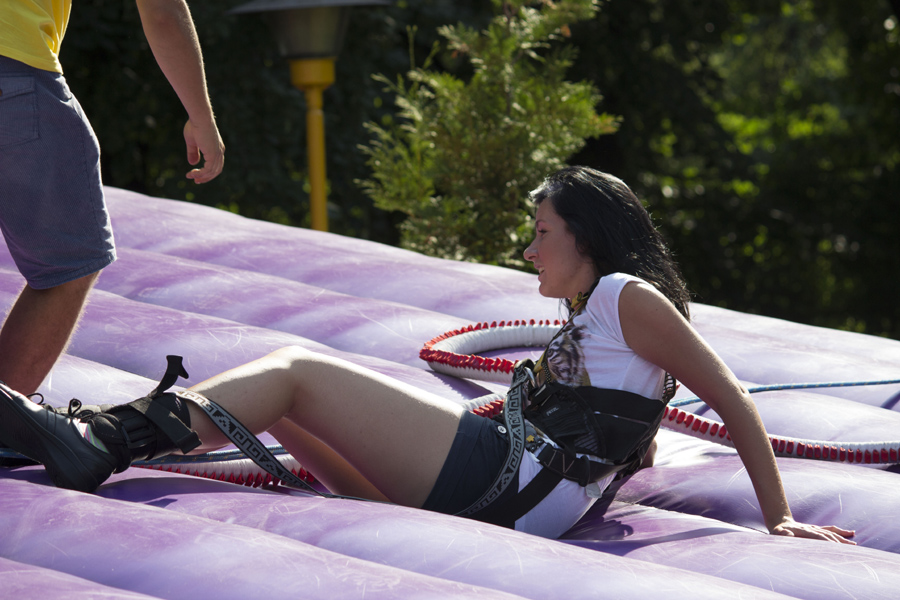 Sandomierz and the optimist’s stone!
prev next